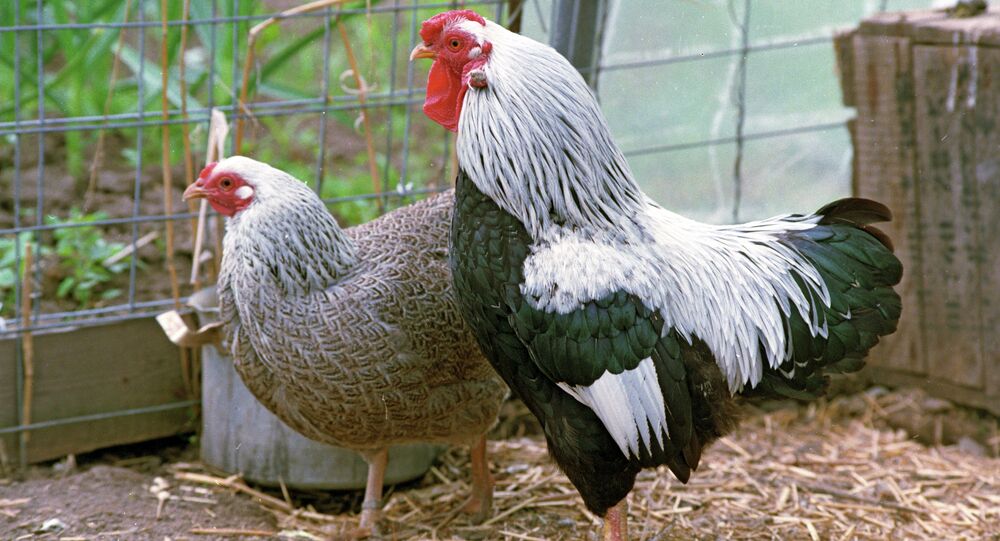 The H5N8 strain was confirmed on November 22 at a breeding poultry farm in the village of Kamperveen in the Dutch province of Overijssel, followed by outbreaks in western Netherlands.

© REUTERS / Ruben Sprich
Yet Another Bird Flu Outbreak in Netherlands, 28 Thousand Chickens Infected
MOSCOW, December 11 (Sputnik) — Russia's agriculture watchdog, Rosselkhoznadzor, said Thursday it had decided to ban imports of live poultry and hatching eggs from the Netherlands starting December 12 due to an outbreak of a highly-contagious strain of the avian flu.

The H5N8 strain was confirmed on November 22 at a breeding poultry farm in the village of Kamperveen in the Dutch province of Overijssel, followed by outbreaks in western Netherlands.

"Following outbreaks of the highly-pathogenic H5N8 strain of the bird flu in the Overijssel and South Holland provinces, a temporary ban on imports of live poultry and hatching eggs from these provinces will be imposed starting December 12," Rosselkhoznadzor said in a statement on its website.

© Sputnik / A.Kornyushenko
New Bird Flu Outbreak Registered in Netherlands: Reports
The avian influenza, also known as the bird flu, is an umbrella term for different flu viruses that affect birds and can sometimes be passed on to humans. The first time the virus was found to have affected people was in 1997, when the flu struck 18 people, six of whom died.

In November, bird flu outbreaks were detected in the Dutch towns of Hekendorp, Ter Aar, Kamperveen and Zoeterwoude, prompting the government to introduce a raft of urgent measures that included bird culls, security zones around the infected farms, hunting bans and the total transport ban for poultry and eggs.

A statement at the Dutch government's webpage cited experts as saying that the virus apparently made it into the country through wild ducks. Migrating water fowl is believed to be natural carriers of bird flu viruses.

On October 21, Russia's agriculture authority restricted for health reasons all imports of cattle, swine and poultry by-products from Europe, saying pathogenic germs and heavy metals had been repeatedly detected in the food imports from EU producers.