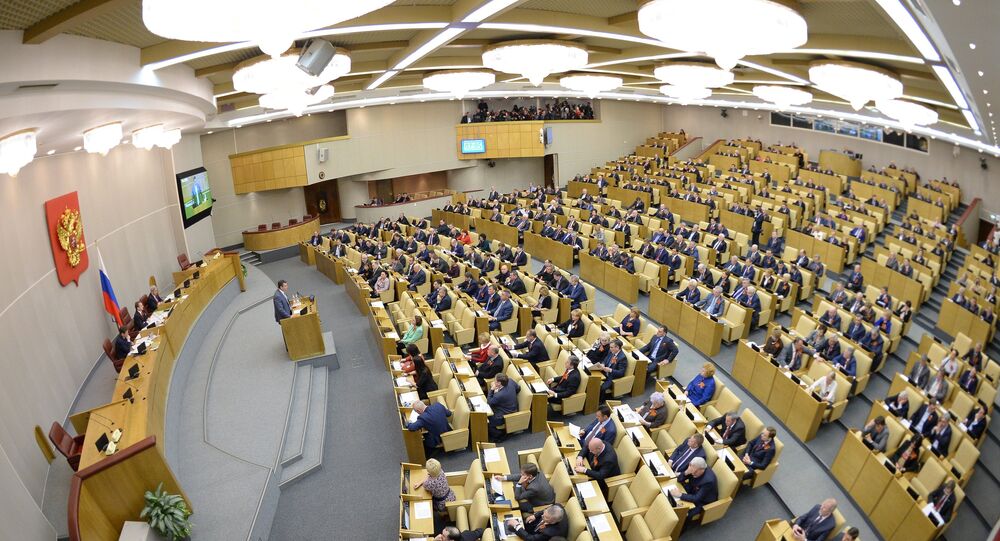 The Russian State Duma has approved the country's budget for 2015 up to 2017 on Friday.

MOSCOW, November 22 (Sputnik) — The State Duma, the lower house of Russian parliament, has approved Russia’s proposed budget for 2015 and the planning period up to 2017 in its third reading on Friday.

The budget bill, set to be approved by the Federation Council (the Russian Senate) and the president, saw modest increases in spending on social and medical insurance and the country’s pension fund, and provided for increased government financial assistance for agriculture and industry for the purpose of import substitution. The document also proposed increased economic support for the Crimea, the increased construction of kindergartens and sports facilities, increased assistance for people with disabilities, and additional funds for the development of federal and regional media.

Introduced to the lower house for debate in late September, the budget was approved by 301 deputies from United Russia and the Liberal Democratic Party, and opposed by 143 deputies, including the Communists and the social democratic party A Just Russia. The bill’s opponents claimed that it earmarked insufficient additions to spending on health, education and economic development. Finance Minister Anton Siluanov and Accounts Chamber head Tatyana Golikova had earlier argued that the original bill introduced in September was “unrealistic” for its failure to take account of slowing economic growth and declining global energy prices, and noted the need to create a backup version of the bill in the event of a worsening macroeconomic picture, Russian business news service RBK explained.

Despite the projected deficit and increased state borrowing, the debt burden on the federal budget between 2015-2017 will remain at less than 15 percent of GDP.

Economic Development Minister Alexei Ulyukaev indicated earlier this week that the loss of revenues from falling energy prices will be partially compensated by the weaker ruble; Russian oil revenues are paid for in dollars.

The proposed budget includes rules aimed at decoupling budget payments based on changes in global energy prices, allowing for the provision of up to 500 billion rubles from Russia’s Reserve Fund to complement funds which can’t be allocated via budget revenues or government borrowing. The growth of the Reserve Fund between 2015-2017 is expected to be provided for by exchange rate differences, its upper limit is set at 5.425 trillion rubles in 2015, 5.825 trillion in 2016, and 6.304 trillion in 2017.

In 2015 a total of 12.3 trillion rubles have been allocated for government programs, 2.3 trillion for economic modernization and innovation, and 1.1 trillion for targeted federal assistance. Up to 150 billion is to be made available as credit for regional budgets, 139.3 billion for priority national projects, 60 billion for the support of various sectors of the economy, for social support and for humanitarian aid to other countries, and 30 billion for a reserve to guarantee loans for project financing.

The Duma also passed bills complementing the budget of the national social insurance fund, the pension fund, and the medical insurance fund, all of which saw modest increases in their allocation of funds. Subsidies aimed at balancing Crimea’s budget total 23.276 billion rubles.

For the purposes of import substitution, the country’s agricultural system was allocated an additional 20 billion rubles (along with 1 billion for sturgeon fishing), and industry was granted 20 billion, including 1 billion rubles for supporting the domestic aviation industry.

Ten billion rubles was provided for the construction of new kindergartens, 3.5 billion for the construction of sports and recreation complexes in rural areas and in institutions of higher learning, and 5 billion for the provision of rehabilitation assistance for people with disabilities, including funding for prosthetics. A total of 6.497 billion is being allocated for the support of federal and regional media development.