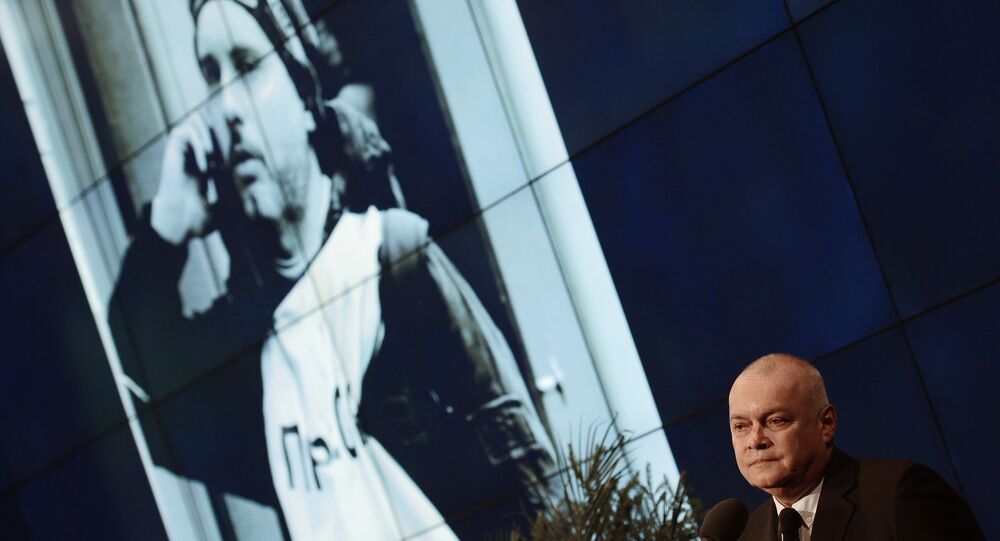 Journalists killed in Ukraine did what they had to do with the greatest dignity and the greatest beauty, Rossiya Segodnya Director General said during a ceremony at Russia's Federation Council in honor of colleagues who died while covering the Ukrainian conflict.

According to Dmitry Kiselev speaking at the ceremony at Russia's Federation Council where the relatives of the deceased journalists were presented with state awards, the journalists "did what they had to do with the greatest dignity and the greatest beauty, which is fit for our common civilization."

"Every one of them willfully found themselves in a situation where a personal choice had to be made, and this choice was not made by the will of a single person. This [choice] was a concentration of energy of all Russia. They drew upon the thousand year experience of our State and did what is worth the people of our country," Kiselev said.

Speaking at the same ceremony, Konstantin Ernst, Director General of the Russian broadcaster Channel One also praised the journalists.

"When events like this happen and especially during armed conflicts, we, when we send our guys [to cover these events] always ask them – will you go? We never make anyone [work in conflict-ridden areas]… But still we feel guilty before their families and friends and it just doesn't go away and neither does the pain," Ernst said.

The Director General of all-Russia State Television and Radio Broadcasting Company (VGTRK), Oleg Dobrodeev stressed that the deceased journalists "gave their lives for the word of truth" and to inform people of the tragic events which took place and are taking place now in eastern Ukraine.

On Monday, Valentina Matvienko, the speaker of the Russian parliament's upper house, the Federation Council, presented state awards to the families of the journalists who died in Ukraine in the course of their professional duties.

In accordance with the Presidential Decree, Rossiya Segodnya photojournalist Andrei Stenin, Channel One cameraman Anatoly Klyan, and the two employees of VGTRK media holding, reporter Igor Kornelyuk and sound engineer Anton Voloshin were posthumously awarded the Order of Courage for their bravery and heroism,

"The names of Andrei Stenin, Anatoly Klyan, Anton Voloshin and Igor Kornelyuk will be forever remembered by their friends, colleagues, Russian citizens and people all over the world. The killing of journalists is a crime, it goes against the very core of a civilized society," Valentina Matvienko said at the ceremony.

She added that the journalists died while fulfilling not only their professional, but also their moral duty to provide people with "honest and objective information and to tell the truth and nothing but the truth."

"The right to information is stipulated in international conventions, but today we see that realizing this right in Ukraine may cost a life," Matvienko concluded.

Since Kiev launched its special military operation against independence supporters in eastern Ukraine in April, over 4,100 people, including civilians, children and journalists on professional duty have died in the region.