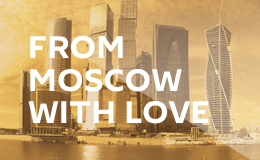 The world famous Globe Theatre in Moscow. What do Muscovites think about it? Has the falling ruble affected Russian show business? And what makes the famous Ostankino TV tower different from other similar structures around the world? All this plus listeners’ letters.

With present tensions in relations between Russia and the West resulting in sanctions and counter sanctions in various areas, it’s interesting when a major theater company performs in Moscow. Natasha recently went to see the world famous Globe Theatre, on tour of Russia. How was the show and what did the Moscow theater crowd think of the show?

The falling Ruble has made life hard not only for plain Russians but for this country’s performers and pop stars. Demand for glittering shows has declined 30% with fans refusing to part with their rubles. Meanwhile, local performers refuse to adjust price tags for their shows. Is there a way out? Vasily investigates.

We recently visited the world famous Ostankino television tower in Moscow – the tallest structure in Europe for a breathtaking nighttime view of the nation’s capital. 537 meters tall and weighing 55000 tones the tower’s unique construction guarantees it’s stability. Find out what makes it “stand out” among other similar structures around the world.