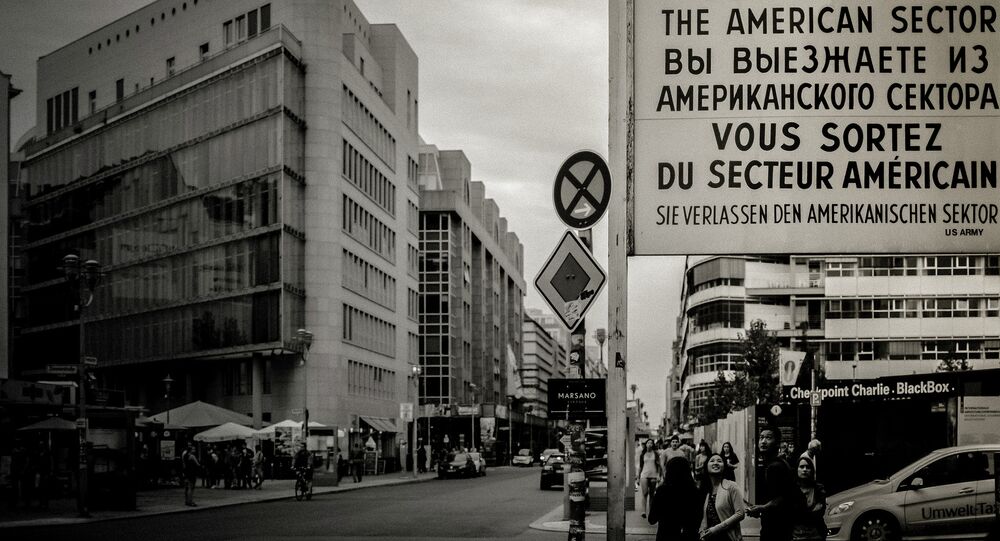 One of the most notable political events which happened immediately after the end of World War II was the split of Germany into four zones, each controlled by the allied powers – Soviet Union, United Kingdom, France and United States – this was the result of the Potsdam Agreement. Berlin, Germany's capital was also split into four parts. The Agreement was drawn up in order to ensure reconstruction of Germany with its pre-war 1937 borders, demilitarization, prosecution of war criminals and reparations.

Without a common enemy, the Western countries and the Eastern bloc quickly turned on each other due to ideological differences and geological aspirations. In 1949 France, the UK and the US combined occupied territories to form West Germany, or the Federal Republic of Germany; Soviet-controlled parts remained as East Germany.

Along with the separate and much longer Inner German border (IGB), which demarcated the border between East and West Germany, it came to symbolize the "Iron Curtain" that separated Western Europe and the Eastern Bloc during the Cold War. The Iron Curtain has fallen. The Berlin wall, one of the most known symbols of the Cold War, was not erected until 1961.

This wall's official purpose was to serve as an "anti-fascist protective rampart" and to stave off activities of western agents in Eastern Europe. In reality, the wall became the symbol of the tensions between the East and the West. The fallout was quick and harsh. For example, in 1961 US Secretary of State Dean Rusk proclaimed:

"The Wall certainly ought not to be a permanent feature of the European landscape. I see no reason why the Soviet Union should think it is — it is to their advantage in any way to leave there that monument to Communist failure."

The wall made Berlin the hardest region to cross borders; it has made life for Berliners tense and has even separated families. At the same time, it has fueled industry and science: the superpowers on each side of the wall wanted to demonstrate that they're faster, more efficient, they're overall better. The Space Race is a stark example, best visualized by NASA's budget history – it had peaked in 1966, with 4.41% of the GDP fueling the Apollo Moon mission; in the last few years the figure is around half percent.

The Berlin Wall was officially torn down in 1989 on the dusk of the Cold War; 339 days later on 3 October 1990 East Germany was dissolved and the official reunification of the German state was complete. Gerhard Shroeder, Germany's Chancellor from 1998 to 2005, said at the 10th anniversary of the fall of the Berlin Wall:

The Wall was brought down, not by Washington or Moscow, but by courageous people from the east. It was brought down by tears of joy, and the process of unity was irreversible.

The wall has not been erased from history, however. One of the most peculiar reminders can be seen from outer space. In 2013 Canadian astronaut Chris Hadfield took a picture of Berlin from the International Space Station. This photo, taken from 400 kilometers above the Earth, displays the line of the old wall: the difference in street lighting between the former east and west gives a stark contrast. The explanation is simple: the eastern part of the city historically used sodium-vapor lamps with a yellower color; the western part used fluorescent lamps – mercury arc lamps and gas lamps, which produce a whiter color. The wall is gone, the cold war is over, but the symbolic split still remains.