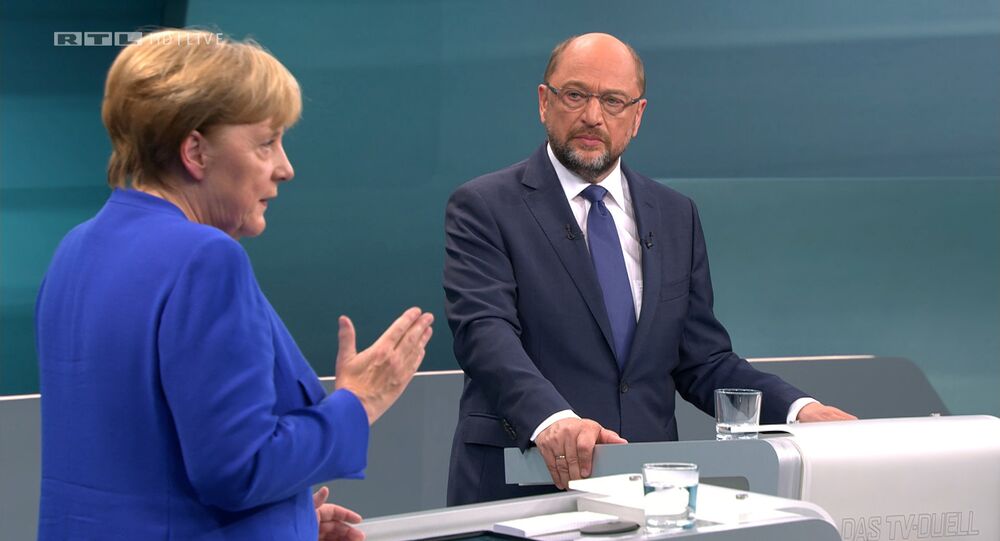 On September 3, German Chancellor Angela Merkel and Social Democrat leader Martin Schulz engaged in a live election debate ahead of the September 24 vote, with four moderators grilling the two candidates. The race for first place may be comfortably over, but key questions remain unsettled.

Billed as a duel between the two party head honchos, the debate exasperated many voters and media observers, who dubbed the discussion a "duet."

Schulz and Merkel struggled to disagree on most major national issues, and moderators failed to focus on the areas — such as social policy — where the pair disagree most. It confirmed what most voters will already have known, and undecided electors are likely to remain undecided.

One thing appears certain after the debate, although it's arguably rarely been less than an effective inevitability over the course of this parliament — Merkel will remain Chancellor after the election, and lead the next German government. The CDU's lead over Schulz' SPD, which reached a nadir of 0.3 percent March, has strongly rebounded, rising to an average of 15 percent across all pollsters.

First polls after 45 min of debate devastating for Schulz, Merkel more convincing and sympathetic. It's over.

​Furthermore, there are already suggestions Schulz' performance in the debate will not change this trend — much the reverse, in fact. Initial polling saw 55 percent of viewers declare Merkel the winner, and more competent, credible and likable than her SPD opponent.

Merkel's critics, who have variously condemned her handling of major issues such as the refugee crisis, and her cold aloof nature, may be extremely puzzled by the adjectives voters opted to ascribe to the Chancellor. SPD supporters may be extremely disappointed in Schulz' showing too, given Merkel is not known for her debating skills or oratorical spontaneity.

The quest for the Chancellor's office now over, Schulz' real challenge is securing sufficient votes to remain SPD Chair — despite a strong start after announcing his candidacy, his momentum rapidly dwindled, and the SPD's polling fortunes are similarly wilting. In 2013, the party won 25.7 percent of the vote — less than this total in 2017, which polling indicates is probable, the former European Parliament President's days at the party helm will be numbered.

Both candidates rebuked Gerhard Schroeder for taking a position on the board of Russian oil giant Rosneft. Merkel accused him of undermining EU sanctions imposed on Russia, and Schulz said he wasn't pleased with the the new role.

The popular former Chancellor, widely regarded as one of Germany's best, who became a hero for peace activists within and without Germany for keeping the country out of the Iraq War, has frequently been critical of the "demonization" of Russia by Western leaders.

After the Rosneft role was pilloried in the mainstream German media, Schroeder responded robustly, saying his detractors "clearly" had an interest in igniting a new Cold War.

"I'm not interested in that and I don't think the majority of Germans are either. For economic and political reasons it is not reasonable to isolate our great neighbor Russia, economically and politically. The demonization of Russia does not help anyone. And the integration into the global economy can help us all."

What form Merkel's government will take is far from assured. Many within the CDU's ranks are keen to end the "grand coalition" with the SPD, and look to the Free Democratic Party as a new partner. The duo are historical allies, having governed the country for the majority of its post-war history. CDU Chancellor Helmut Kohl led five such governments between 1982 — 1998.

© AFP 2021 / Frederick Florin
This file photo taken on May 29, 2016 shows German Chancellor Angela Merkel (L) and the President of the European Parliament Martin Schulz during a remembrance ceremony to mark the centenary of the battle of Verdun, at the Douaumont Ossuary (Ossuaire de Douaumont), northeastern France.

However, the FDP's fortunes have sharply declined since the turn of the century, and the 2013 election saw the party lose all its federal parliamentary representation — in 2017, not a single German state boasts a CDU/FDP government.

Moreover, polling suggests Merkel will need the support of more than one small party to form a majority administration. One potential amalgam would be the CDU, the Greens and Free Democratic Party — although the lumping of two center-right pro-business parties and a left-leaning environmentally-focused one may not be acceptable to the leaders or voters in one or all of the parties involved. Such a coalition has never governed the country before, but has governed a single state (Saarland) once (from 2009 — 2012). Nonetheless, Merkel may not be able to depend on the FDP's support in any event — in August, Christian Lindner, the party's leader, called for Crimea's reunification with Russia to be viewed as a "permanent provisional solution" and for anti-Russian sanctions to be lifted.

Evidently, another "grand coalition" isn't off the table entirely. The pair's palpable harmony on most key issues by definition suggests reaching a new coalition agreement would be fairly straightforward — certainly much easier than the "Jamaica" grouping of the CDU, Greens and FDP.