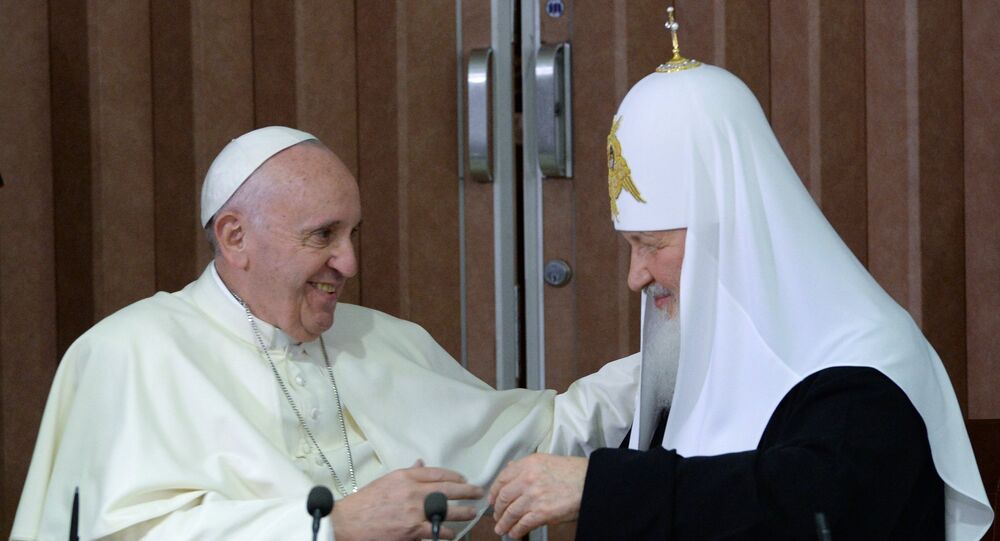 Russian Orthodox Church Patriarch Kirill said that relations between the Russian Orthodox and Roman Catholic churches are entering a new stage in the wake of last year's meeting.

MOSCOW (Sputnik) – Relations between the Russian Orthodox and Roman Catholic churches are entering a new stage in the wake of last year's meeting between the leaders of the two branches of Christianity, Russian Orthodox Church Patriarch Kirill said Tuesday while meeting with Vatican Secretary of State Cardinal Pietro Parolin.

"Indeed, our relations entered a new stage of development, filled with important events. In Havana we agreed positions on very important contemporary problems and the common vision lets us design the respective plans and fill them with real content," Patriarch Kirill said.

Moreover, the Russian Orthodox Church has agreed with the Catholic Church to cooperate on humanitarian aid to civilians affected by Middle Eastern military conflicts.

© AFP 2021 / Fadi Dirani
UN, Red Cross Sent 14 Aid Convoys to Syria's Safe Zones Since July - Russian Military
“Our Church actively provides humanitarian aid to people suffering from the conflict in Syria and in other Middle Eastern countries. It is very important to rely on support of the whole Christian community when doing this. And I think that the relations between the Orthodox and Catholic churches in terms of assisting people suffering in the Middle East would be a crucial consolidating factor… By developing our cooperation in this area, we can try to set the scene for bilateral projects, related to supporting those who suffer from war in the Middle East” the patriarch said.

On February 12, 2016, Cuba’s capital hosted an unprecedented meeting between Pope Francis and Patriarch Kirill, which resulted in adoption of a joint statement.

Parolin started his four-day trip to Russia on Monday. The agenda of his visit includes meetings with Russian leadership and representatives of the Russian Orthodox Church to discuss bilateral and international issues.