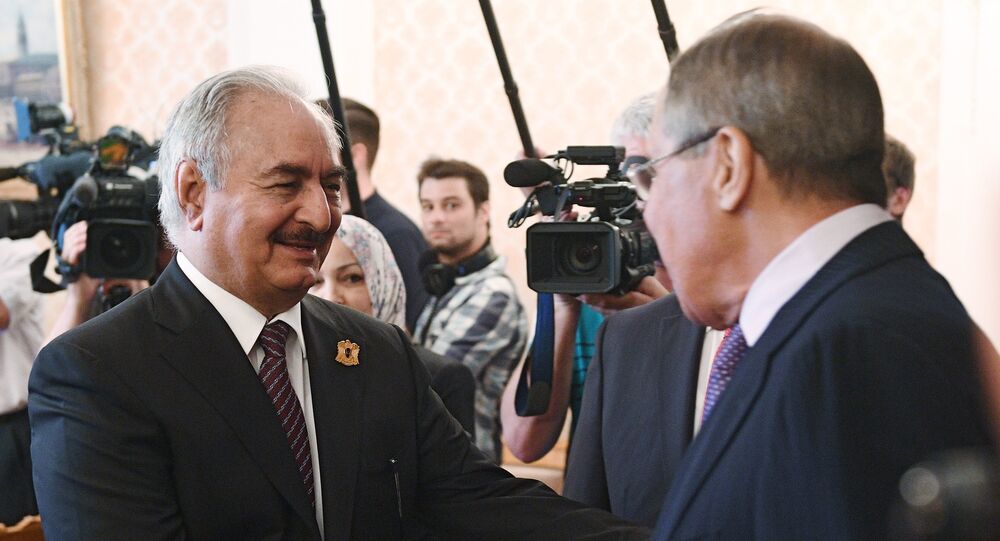 MOSCOW (Sputnik) – Lavrov added that while the situation in Libya remains complicated, actions are being undertaken in order to reach national a political solution.

"Unfortunately, the situation in Libya remains difficult, the threat of extremism has not been overcome in your homeland. However, we know about the actions which are being undertaken and actively support the tendency of intensification of political resolution processes, the full-scale restoration of the statehood of your country," Lavrov said at a meeting with Khalifa Haftar, the head of the Libyan Natonal Army.

© AP Photo / Michel Euler
'Haftar Is the Clear Winner' After Libyan Rivals Agree to Ceasefire
"We are aware of the efforts being made with your participation, with the participation of Sarraj, which are aimed at ensuring generally acceptable agreements on optimal ways of implementing the Skhirat agreement," Lavrov told Haftar. "We support your set towards reaching such agreements," he added.

All mediation efforts in Libya should be carried out on the basis of the United Nations, Lavrov said.

"We believe that it is very important to focus all mediation efforts and ideas on the political front on the basis of the activities of the United Nations."

© AP Photo / Mohammed El-Sheikhy
Moscow Communicates With All Sides of Libyan Internal Conflict to Help Solve Crisis
According to Lavrov, Moscow sees such activities "not as aimed at development of solutions, but as a contribution to the most favorable conditions for a dialogue between key figures in Libya, so that they themselves agree on the future of their country."

"This is our principled stance," the minister said.

Libya has been suffering from a civil war since 2011 when long-time leader Muammar Gaddafi was overthrown. The country’s eastern regions are governed by the elected parliament headquartered in the city of Tobruk. Besides, the Government of National Accord, formed with the support from the United Nations and Europe and headed by Fayez Sarraj, operates in the country’s west, including the Libyan capital of Tripoli.

The eastern authorities act independently from the west, cooperating with the National Army led by Haftar, which fights against Islamist terrorists.

Moscow Communicates With All Sides of Libyan Internal Conflict