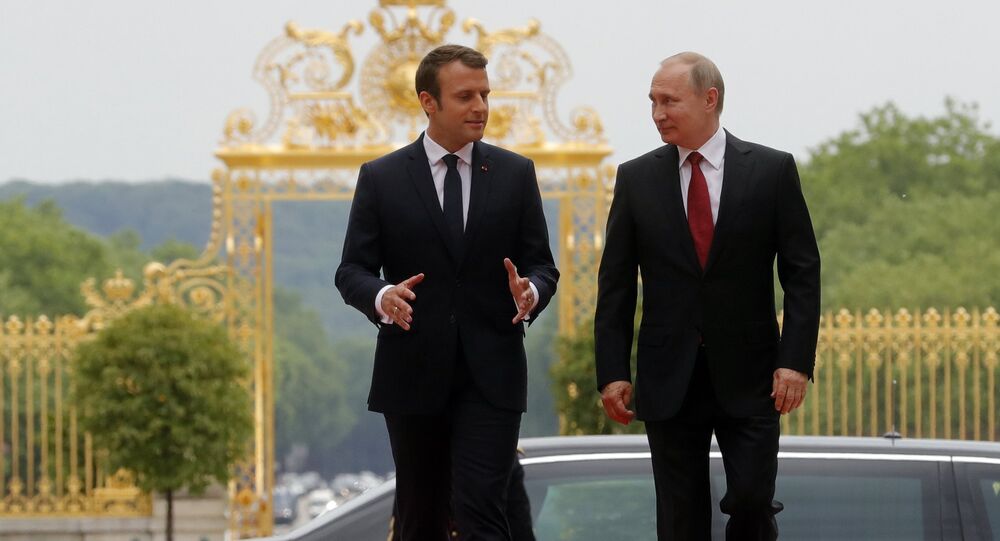 French President Emmanuel Macron stated that cooperation between Russia and France on the Syrian issue on the ground has completely changed after his meeting with Russian President Vladimir Putin in Versailles.

© REUTERS / Jonathan Ernst
Trump-Macron Meeting in Paris to Focus on Syria, Counterterrorism Efforts
MOSCOW (Sputnik) — Cooperation between Russia and France on the Syrian issue has completely changed after the first presidential bilateral meeting with Russian President Vladimir Putin in Versailles in May, French President Emmanuel Macron said in an interview with Le Journal du Dimanche newspaper on Sunday.

"I state that we are progressing on these issues after Versailles meeting. The cooperation between our agencies on the ground has completely changed," Macron said.

Macron stressed that he would stick to his position on the unacceptability of chemical weapon use in Syria, and reiterated that he did not insist on the demand for the resignation of Syrian President Bashar Assad as part of the Syrian crisis settlement. The French president also mentioned humanitarian access as a key French demand on the Syrian settlement issue.

© REUTERS / Philippe Wojazer
French President Macron 'Respects Vladimir Putin' Despite Some Disagreements
On May 29, Macron and Putin held their first official meeting at the Versailles Palace, focusing on bilateral relations and key international issues, particularly the situations in Ukraine and Syria.

Syria has been in a state of civil war since 2011, with government forces fighting Syrian opposition groups striving to overthrow the president. Damascus is also fighting numerous extremist and terrorist groups such as the Jabhat Fatah al Sham and the Daesh, both outlawed in Russia.