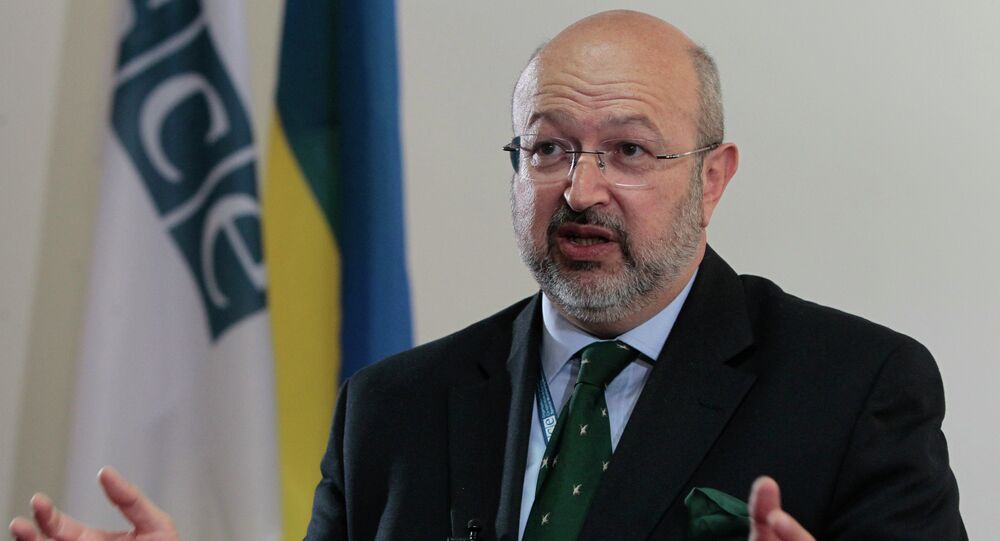 OSCE Chief on Kiev Russia Media Ban: Access Should Be Given to All Info Sources

Commenting on the recent sanctions imposed by the Kiev authorities on Russian media, Secretary General of the Organization for Security and Co-operation in Europe (OSCE) Lamberto Zannier told Sputnik that people should be given access to all sources of information.

MOSCOW (Sputnik) — On May 16, Ukrainian President Petro Poroshenko approved the decision of the National Security and Defense Council (NSDC) to expand the list of sanctioned Russian individuals and legal entities. In particular, Ukraine has imposed sanctions on a number of Russian social networks and media outlets, including Rossiya Segodnya International Information Agency, TV channels Zvezda, TVC, NTV Plus, RenTV and RBC.

"We have principles in the OSCE and when it comes to media freedom, people should be given access to a wide variety of sources of information. There should be opportunities to disseminate these things," Zannier said when asked about his take on the initiatives by the Ukrainian government.

© Flickr / SerenityRose
Ukraine's New Anti-Russia Sanctions Targeting Media Violate Media Freedom - IFJ
Russia's Permanent Representative to the OSCE Alexander Lukashevich said that new sanctions against Russian organizations, politicians and the media, imposed earlier this year, are part of Kiev's policy of suppressing the civil rights of the population and called on OSCE to address this issue.

The OSCE secretary general added that the former OSCE press freedom representative had called on the authorities in Ukraine in 2016 to refrain from any measures that would limit free media when the initial round of sanctions targeting Russian press was imposed.

"In the case of Ukraine, we have special institutions in the OSCE, the OSCE representative on the freedom of the media, and this representative, when she was in the office, unfortunately now this is a vacant position, she called on the authorities in Ukraine, asking them to refrain from the restrictive law that limits a free media and a free flow of information. So, the message that the Russian ambassador was passing here has been taken up by the relevant OSCE institution and transmitted also to the Ukrainian side with an appeal to create the necessary space for all information sources to play their role without additional obstacles," Zannier said.

He added that he "unfortunately" saw no major change in Ukraine’s policies.

"The problem is that now we do not have a Representative on Freedom of the Media. It would be the job of that person to really answer your question and to tell you whether in your assessment the situation has improved or not," Zannier noted.

Kremlin spokesman Dmitry Peskov said, commenting on the decision of the Ukrainian authorities, that Moscow regarded it as another manifestation of an unfriendly and short-sighted policy against Russia.

US State Dept. Urges Russia to Use Influence to Grant Access to OSCE in Donbass