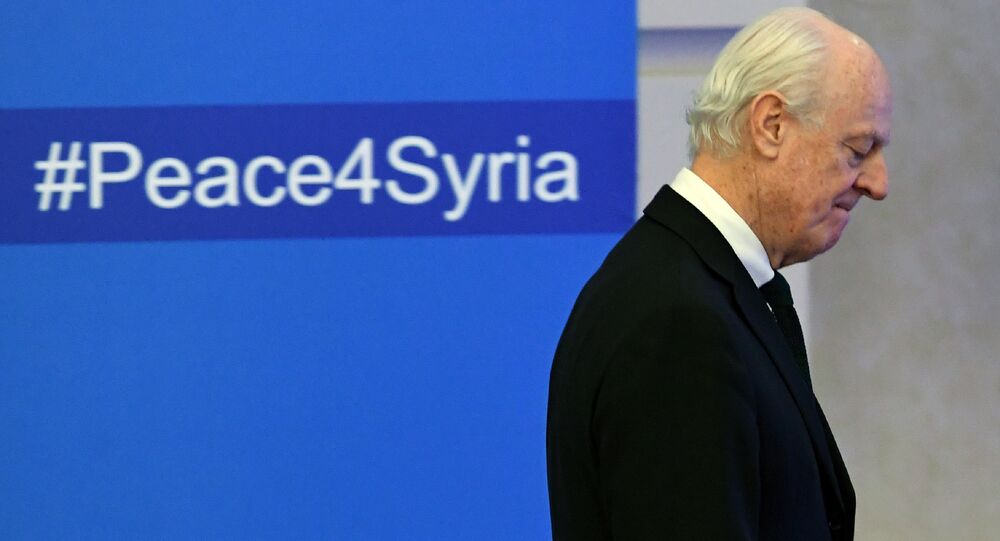 UN Special Envoy for Syria Staffan de Mistura has withdrawn his proposal on creating a consultative mechanism for addressing constitutional matters in the war-torn country, a member of the opposition High Negotiations Committee (HNC) delegation, Abdul Hakim Bashar, told Sputnik after the delegation's meeting with Mistura.

© AFP 2020 / DENIS BALIBOUSE / POOL
Syria Talks Parties Consider Creation of Mechanism of Discussing Constitution
GENEVA (Sputnik) — On Tuesday, the sixth round of the UN-mediated intra-Syria negotiations kicked off in the Swiss city of Geneva. The round is expected to last until May 19.

This round of Syria talks in Geneva will be organized slightly different compared to the previous ones, as the sides are going to have businesslike intensive meetings and are not going to deliver press stakeouts.

Syria's Moscow opposition platform views the creation of a consultative mechanism on a constitution for the war-torn country, proposed by UN Special Envoy for Syria Staffan de Mistura, as a step toward direct intra-Syrian negotiations, head of the delegation Mohannad Dlykan said Wednesday.

"Direct negotiations is not far away. Agreeing on a consultative mechanism is a step towards that. But it requires one delegation, and we are looking forward for one delegation of opposition," Dlykan told reporters.

The Syrian opposition High Negotiations Committee (HNC) delegation is divided on the issue of de Mistura's alleged withdrawal of his proposal on the creation of a consultative mechanism for constitutional matters, HNC member Khalid Mohammed told Sputnik.

"De Mistura will reformulate his suggestion about the consultative mechanism. He did not really withdraw it," Mohammed said, following the statements by other members that it was withdrawn.

Another member of HNC delegation Abdel Ahad Estifu also confirmed to Sputnik Mistura's paper would just be reviewed for changes.

Earlier, sources close to the negotiations process told Sputnik that parties to the intra-Syrian talks in Geneva are examining the possibility of establishment of a special mechanism for discussing Syria's constitution during the current round of talks in Geneva.

The fact that constitution is going to be the main topic on the agenda at the sixth round of talks in Geneva was also confirmed to Sputnik by the leader of the Astana platform of Syrian opposition.

This is When Polish President Wants to Hold Constitutional Referendum