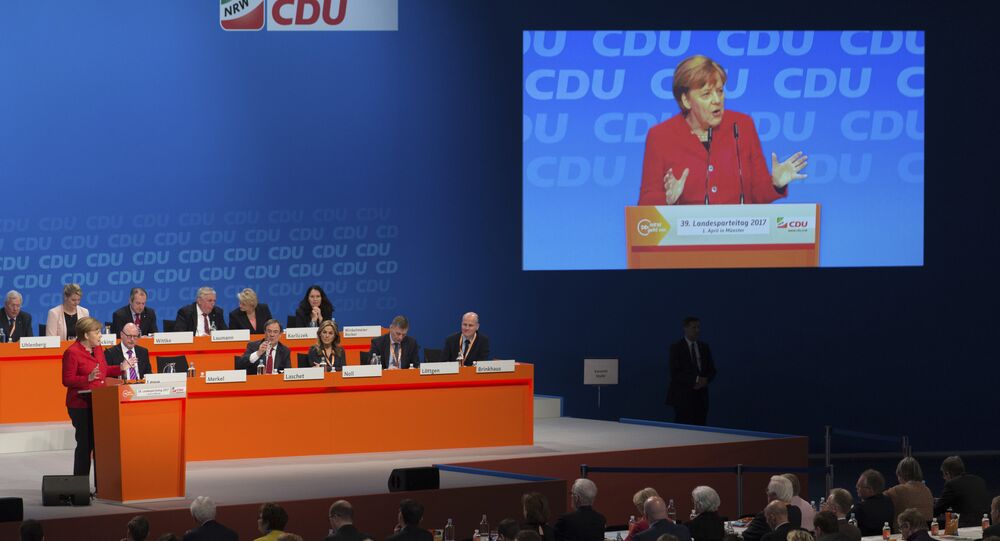 German Chancellor Angela Merkel's Christian Democratic Union (CDU) is winning in the election in the local parliament over the Social Democratic Party of Germany (SPD) in Germany’s most populous state of North Rhine-Westphalia, which is considered to be a strong hold of decades-long support for the SPD.

Almost two thirds of citizens, 65.5 percent, cast their votes in the election, which is 6 percent more than the previous election in 2012, according to the electoral committee.

The most populous German state (13.1 million voters) held local elections four months before the election to the Bundestag, the lower house of parliament. The results in of North Rhine-Westphalia are likely to reflect a real balance of powers for the upcoming September vote.

© REUTERS / Hannibal Hanschke
Merkel's Conservative Bloc Gains Ground 4 Months Ahead of German Election - Poll
SPD head Martin Schulz, as well as Hannelore Kraft, the party’s governor in North Rhine-Westphalia, reiterated during the election campaign that the state had been considered to be a traditional heartland of the SPD for almost 50 years and labeled the vote to be a mini-election to the Bundestag.

Thus, the SPD’s third consequent defeat in the local elections this year seems bitterer following Schulz’s assent to power which actually prompted high party’s rating in the beginning of 2017.

"This is a hard day for SPD, a hard day for me personally: I come from the Federal State, where we have suffered defeat," Schulz said, admitting defeat in elections.

Polar view on the election day was apparently voiced by the CDU.

"It is a good day for North Rhine-Westphalia. We had to goals – to finish the ruling of right-green coalition and to become the strongest political force. We succeeded in both, thanks to everyone," Merkel’s CDU Vice-Chairman Armin Laschet said at the party’s headquarters.

A festive atmosphere in the CDU headquarters prevailed after the preliminary election results were announced. The party is placing high expectations for victory in the September election.

"Our primary aim is to win the September election to the Bundestag, which we want to win. That is why today we have a holiday, while starting tomorrow a serious work for the benefit of Germany will start," CDU's general secretary Peter Tauber said.

© REUTERS / Fabrizio Bensch
Germany's SPD Narrows Gap With CDU/CSU Union Parties Gaining 32% - Poll
Tauber noted that the victory in the region was ensured by the successful party’s policy in the spheres of security, infrastructure and education policy.

The SPD camp was deeply disappointed by the results. Hannelore Kraft, the former head of government in Germany's North Rhine-Westphalia, promised to quit her political career after the results of the elections in local parliament.

Schulz expressed support for Kraft and voiced determination to continue the "struggle" in the fall election.

"We win together, we lose together," Shulz said.

The upcoming nationwide parliamentary elections to the Bundestag are due to take place on September 24.

Merkel: Germany Not The First One Who Must Expand Capacities in Afghanistan'