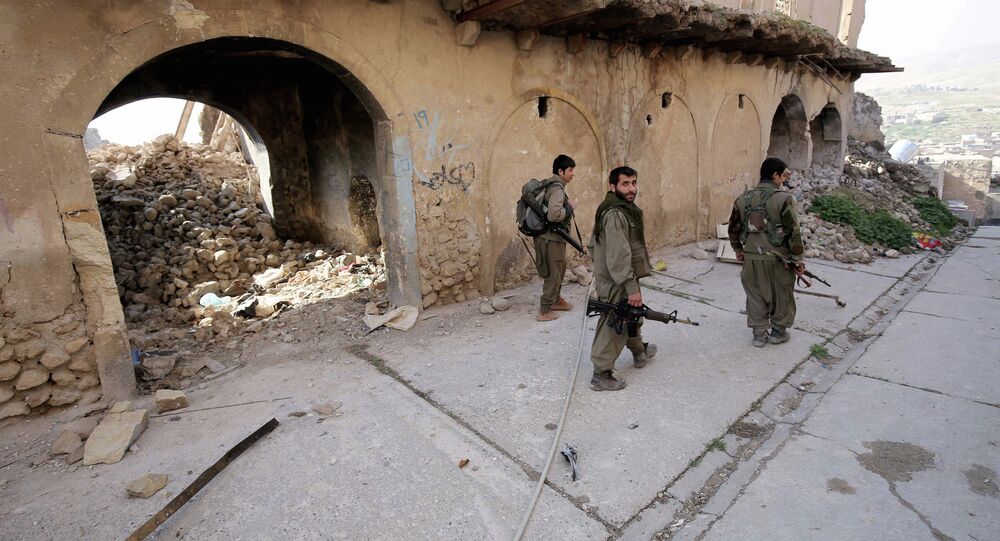 As Turkish and Russian Presidents are set to meet in the Russia's Black Sea resort of Sochi later on Wednesday, Sputnik Turkiye talked to Turkish politicians and political analysts about the legitimacy of recent Turkish attack on Kurdish positions in Iraq and whether it is going to have any impact on the Turkish-Russian talks and further relations.

© REUTERS / Rodi Said
US 'Deep Concern' Not a 'Fitting' Reaction to Turkish Air Strikes on Kurds
On April 25, Turkish jets struck the positions of the Kurdish People's Protection Units (YPG), in northern Syria and Iraq, killing about 70 Kurdish fighters, causing consternation and confusion around the globe.

In Iraq, the Turkish planes bombed Kurdish fighters from the Kurdistan Workers' Party (PKK) in Sinjar region. In Syria, the air strikes targeted the positions the Kurdish People's Protection Units (YPG) in the Karachok Mountains in the northeast of the country. YPG units remain a key component of the Syrian Democratic Forces (SDF), which are backed by the US and which have been closing in on Raqqa, the self-proclaimed capital of the terrorist organization Daesh (ISIS).

In Washington, the State Department said it was "deeply concerned" by the air strikes, which were not authorized by the US-led coalition Turkey is part of.

Russian officials responded by condemning the Turkish air strikes against the Kurds in Syria and Iraq.

"We were greatly disturbed by reports of Ankara’s operations. There is reason to believe that if it was not for the hasty US attack on Syria’s Shayrat Airbase, which was outside the bounds of international law, Turkey would not have carried out the recent strikes. It is necessary to put an end to arbitrariness on Syrian soil. We urge all international and regional partners to respect the sovereignty and independence of Syria and Iraq, as well as of other countries," Foreign Ministry Spokesperson Maria Zakharova said during her weekly briefing last Thursday.

Turkey, however, claimed that the airstrikes were aimed at preventing the Kurdish fighters from sending terrorists and weapons to Turkey.

© AP Photo / Alexander Zemlianichenko
Syria, S-400s and Trade: What to Expect from the Putin-Erdogan Meeting
Ahead of the meeting between Russian and Turkish Presidents in Sochi, Sputnik Turkiye talked to Turkish politicians and political analysts about the legitimacy of the recent Turkish attack on the Kurdish positions in Iraq and whether they would have any impact on the Turkish-Russian talks and further relations.

Bilgay Duman, an expert with the Ankara-based Center for Middle Eastern Strategic Studies (ORSAM) firmly expressed his opinion that the Turkish operation in Iraq was legitimate.

"Across the border (with Iraq), terrorists are very active and Iraq is unable to eliminate them on its own, hence the Turkish operation is legitimate," he told Sputnik, adding that Ankara acted within its rights, as set up by international law.

He also commented on  US deliveries of armored vehicles through Iraqi Kurdistan to Syria-based units of the Iraqi People's Mobilization Forces (PMF), also known as Popular Mobilization Units (PMU), saying that the Iraqi Kurds are an ally of Turkey.

"All the parties should be friendly in their relationship with Turkey as the cooperation with Turkey will bring its contribution to the guarantee of stability in the region. Both Russia and the US should render more support to Turkey, which is one of the strongest countries in the region," he told Sputnik.

© REUTERS / Rodi Said
Bloody Message: Turkey's Attacks on Kurds Show It is 'Not Happy' About Kurdish-Russia-US Contacts
The expert further noted that Ankara can't stand against Russia and the US, hence the relations between these countries are of primary importance to the region. Further cooperation between these countries, he said, depends on simultaneous steps being taken by of all the parties, including Russia and the US.

"It is hard for me to understand the reaction to the operations conducted against the Kurdistan Workers' Party (PKK) for the sake of ensuring Turkey's own security. We think that it is important to review the operation in Sinjar within the context of the fight against terrorist organizations and as a full-fledged operation and not as any kind of demonstrative action," he told Sputnik.

The politician said he hopes that the attack on Sinjar won't have any negative impact on Ankara's relations with Russia.

"This operation won't have any negative impact on the negotiations. We, as a party which gives weight to the relationship with Russia, do not think that Moscow will take a strong stand on Turkey because of Sinjar. Our relations are very close now, therefore, Russia should be as attentive to issues that are particularly sensitive to Turkey, as Turkey is attentive to the issues which are sensitive to Russia," he said.

© AP Photo / Bram Janssen
Iraqi City of Mosul to Be Fully Liberated From Daesh Within One Month
Meanwhile Aydın Selcen, former Turkish Consul General in Erbil, wrote to Sputnik that he does not think that the legitimacy of the Turkish aerial operation in the region, where the centralized authorities of Iraq and Syria have lost their authority, where such a phenomenon as Daesh had come into being, where various armed units are raging and where global and regional powers are currently facing off, would remain on the agenda for a long time.

The former diplomat suggested that this attack won't affect the meeting between Presidents Erdogan and Putin. However he suggested that the bilateral contacts and following developments will define the tone and context of the further negotiations between Erdogan and Trump and will likely define whether there is going to be any meeting between these leaders at all, he concluded.