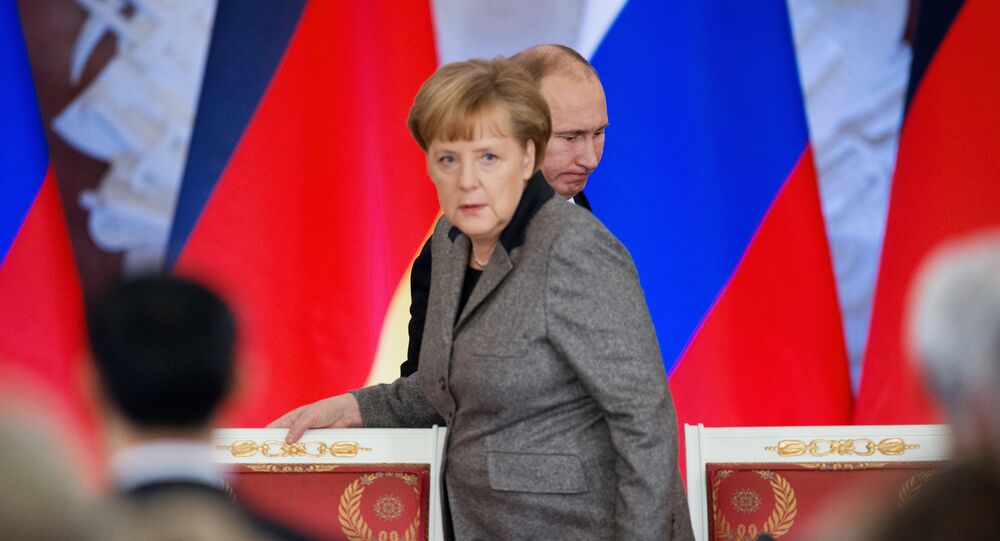 Russian President Vladimir Putin and German Chancellor Angela Merkel will discuss key international problems during their upcoming meeting in Sochi, Kremlin officials said. In an interview with Sputnik, political expert Alexei Panin noted that Merkel is coming to Russia at a difficult time for her.

© AP Photo / Evgeniy Maloletka
Merkel Visits Sochi to Save Minsk Agreements As Kiev's Violations Continue
According to the expert, during the meeting the leaders, among other things, are likely to discuss the situation in the Middle East: in Syria and Iraq.

"The parties hold different opinions on the issue: who is right, who is to blame, and what should be done about it," Panin stated.

In his opinion, the meeting can be viewed as a kind of preparation for the G-20 summit. The expert also noted that the German leader is currently having a difficult time due to various factors.

"Mrs. Merkel's is now having a very difficult time: not only because of the upcoming election, but also because of the fact that Washington now has a quite unpredictable and, to some extent, an authoritarian politician — Donald Trump. Berlin finds itself between the devil and the deep blue sea, namely between Washington and Moscow. And in this, not very pleasant, reality for Germany, it has to reposition itself and build priorities," Panin stated.

As for the anti-Russian sanctions, Panin believes that this issue is unlikely to be discussed by the parties during the upcoming meeting.

"Of course, Moscow won't start this discussion first, while Ms. Merkel and Germany's other representatives have repeatedly said that the conditions for the lifting of the sanctions have not yet been met. Referring to the situation in Ukraine, I assume the parties will pretend that the problem of the sanctions does not exist," the political expert said.

Russian President Vladimir Putin and Federal Chancellor of Germany Angela Merkel will meet on May 2, in Sochi to address key international issues, including the fight against terrorism, the situation in the Middle East and the implementation of the Minsk agreements.

Black Sea Voyage: What to Expect From Merkel's Meeting With Putin in Sochi