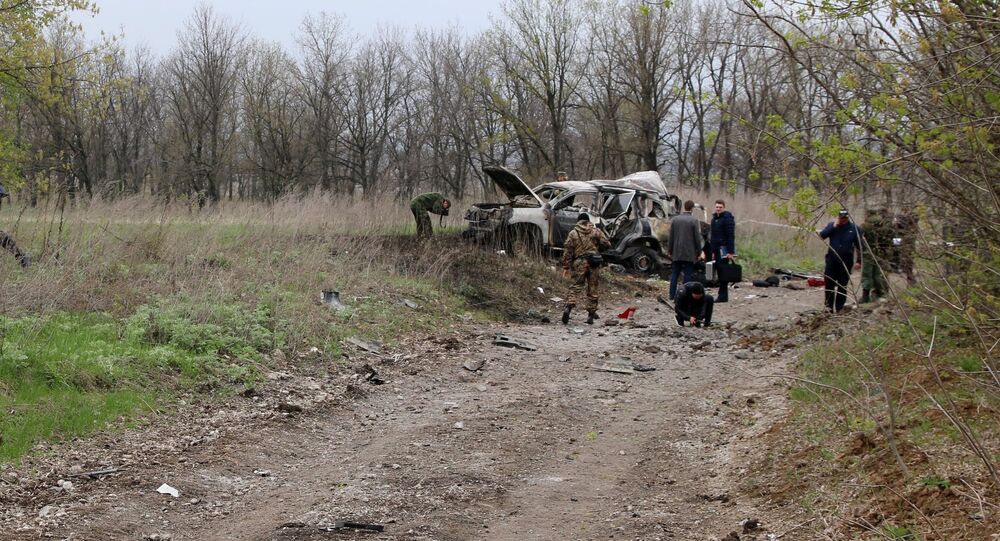 Russian Foreign Minister Sergei Lavrov and Secretary General of the Organisation for Security and Co-operation in Europe (OSCE) Lamberto Zannier are holding a joint press conference following their meeting in Moscow on Tuesday, April 25.

© Sputnik / Sergey Averin
OSCE Car Blows Up in East Ukraine: At Least 1 Staff Member Killed
Engagement of the OSCE in settling the crisis in Ukraine was one of the key topics during talks with Russian Foreign Minister Sergey Lavrov, OSCE Secretary General Lamberto Zannier said Tuesday.

On Sunday, law enforcement officials of the self-proclaimed Lugansk People's Republic (LPR) said the explosion hit the observers' car near the Pryshyb settlement in the Lugansk region and, as a result, one SMM member was killed. Later in the day, OSCE Principal Deputy Chief Monitor Alexander Hug confirmed the explosion, adding that the blast killed a US citizen and injured two more people from Germany and the Czech Republic.

"The crisis in and around Ukraine — unfortunately, our engagement in this crisis was one of the key focuses of our debates today also in light of the unfortunate incident," Zannier said during a press conference.

Measures to ensure the security of OSCE observers in Donbas should be tightened, Lavrov said.

"We are convinced that measures to ensure proper security of the mission's staff should be further tightened, for this it is necessary to intensify the work both in the Contact Group and in the Joint Center for Control and Coordination," Lavrov said.

The OSCE is launching a criminal investigation to uncover how a mine was left on a civilian road in eastern Ukraine's Luhansk region, Zannier said.

"I am now setting up an internal investigation, there will also have to be a criminal investigation about this, to understand also responsibilities how the mine was left on a road that is also used by civilians," Zannier said during a press conference.

Zannier noted that the OSCE is recording an increase of incidents with its SMM members in Ukraine and is calling on both sides to the conflict for better respect of its mandate.

"What we have seen in recent times is a multiplication of incidents where our monitors are reporting shots in the vicinity, in some case it is shelling… We have had situations where the lack of respect was also present. We would like to see a better understanding of the mandate and a better understanding of the fact that we are there to assist everybody," Zannier said at the press conference.

Talking about the crisis in Ukraine, Russian Foreign Minister Sergey Lavrov said that the Ukrainian government has not fulfilled any obligations under the Minsk ceasefire agreements.

"The Ukrainian government has not done anything that the Ukrainian side is required to do under various pretexts," Lavrov said after talks with OSCE Secretary General Lamberto Zannier.

© Sputnik / Lugansk People's Republic people's militia
UN Urges Investigation Into Deadly OSCE Mission Incident in Ukraine
The Donbass conflict erupted in April 2014 as a local counter-reaction to the West-sponsored Maidan coup in Kiev that had toppled President Viktor Yanukovych in February. Residents of the Donetsk and Lugansk regions held independence referendums and proclaimed the People's Republics of Donetsk and Lugansk. Kiev has since been conducting a military operation, encountering stiff local resistance.