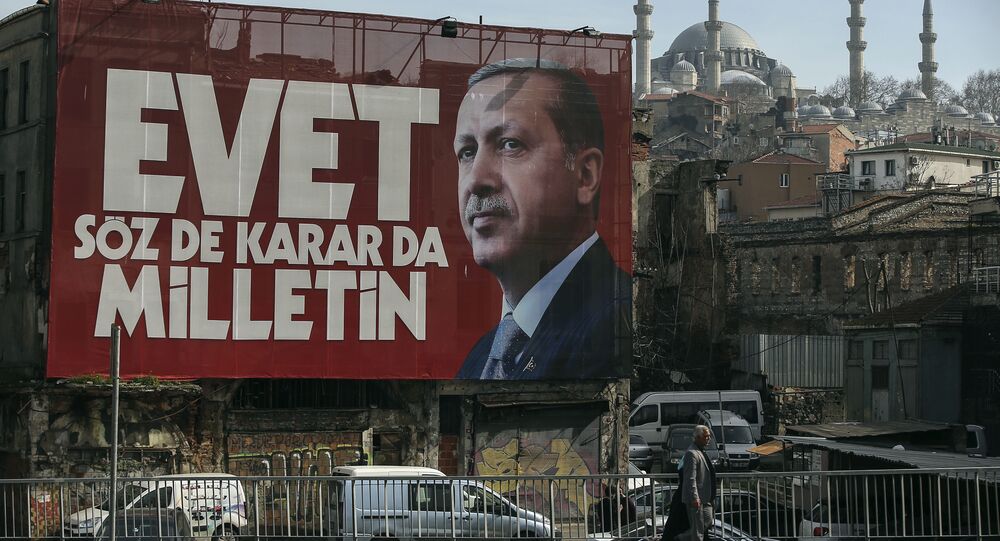 On April 16, Turkey will hold a referendum on amendments to the constitution, which, if approved, would expand the presidential powers. If Turkish Erdogan establishes the new system, democracy in the country will shrink even further, sociologist Dr. Asli Vatansever from the Leibniz Center for Modern Orient in Berlin told Sputnik Germany.

At the same time, the expert believes that the vote on the constitutional reform won't significantly change the current policy in the country.

"No matter if ‘Yes' or ‘No' comes out, we are not expecting anything surprising in the short run. If it is ‘Yes,' we would still have a dictatorship, which we de facto already have. With a ‘No,' I fear that there might be a bloodbath again, as it was after the coup in July 2016," the expert said.

According to Vatansever, by a ‘No' vote, Erdogan's reaction could be harsh as he is not ready to lose and will try to maintain his power by all means.

"He would not accept this as the result of a democratic procedure. He would try to maintain his dictatorship at any cost," the expert said.

According to the OSCE observation mission report, the referendum campaign in Turkey could be characterized by "polarization" and restrictions, with 'No' supporters facing police interventions and arrests in several cases.

"This is true, mainstream media in Turkey are under control of the state. And all NGOs and alternative media were closed after the last coup attempt. This is why a fair campaign is impossible. But I would still say that the ‘No' camp is quite strong and goal-oriented. So, both camps are currently on the same level," Vatansver concluded.

Erdogan: Western States Striving for ‘No’ in Turkish Constitutional Referendum