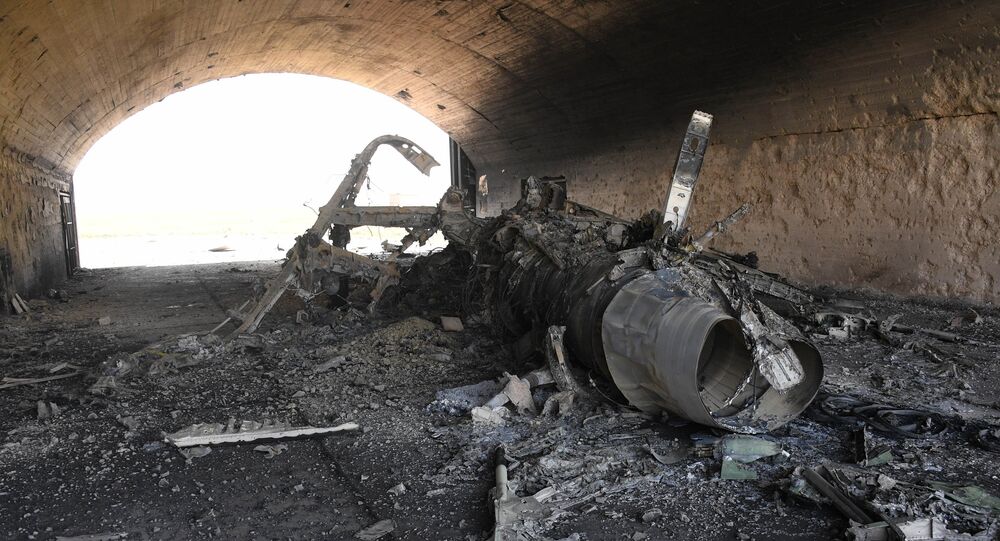 Following the United States' attack on the Syrian airbase in Idlib, the Syrian foreign minister will travel to Moscow to discuss with his Russian counterpart measures to minimize consequences of the incident for international and regional peace and security.

"At the invitation of Foreign Minister Sergey Lavrov, on April 13-15, Syrian Foreign Minister Mr. Muallem will pay a working visit to Russia… Possible joint steps will be considered to minimize the negative consequences of this gross violation of international law [the US attack on Syria's airbase] for international and regional peace and security," Russian Foreign Ministry spokeswoman Maria Zakharova said at a briefing Wednesday.

Earlier this week, Syrian Ambassador to Russia Riyad Haddad told Sputnik that Muallem would visit Moscow soon in relation to the latest events in the Syrian province of Idlib and the US attack on a Syrian airbase.

On Tuesday, chairman of the Russian State Duma International Affairs Committee Leonid Slutsky said that a permanent parliamentary trilateral committee composed of Russian, Syrian and Iranian lawmakers may be established in the near future, with the decision expected to be made after the trilateral talks on April 14.

© Sputnik / Mikhail Voskresenskiy
Accepting Draft Resolution Would Legitimize US Strikes in Syria - Russian Envoy to UN
On April 4, the Syrian National Coalition of Revolutionary and Opposition Forces reported a chemical weapon attack in Syria’s Idlib province. According to recent data provided by the World Health Organization (WHO), 84 people, including 27 children died as a result of the tragic incident. The West has accused the Syrian government of carrying out the attack.

Muallem denied the government’s involvement in the Idlib incident, saying it had never used nor would it ever use chemical weapons on either civilians or terrorists operating in the country.

However, the incident was used as pretext for the US missile strike against the Ash Sha’irat airbase carried out late on April 6. US President Donald Trump characterized the strike as a response to the alleged use of chemical weapons by the Syrian government troops, while Lavrov said it was a violation of international law.

White House: China Abstained From UN Vote on Syria Thanks to Trump-Xi Meeting