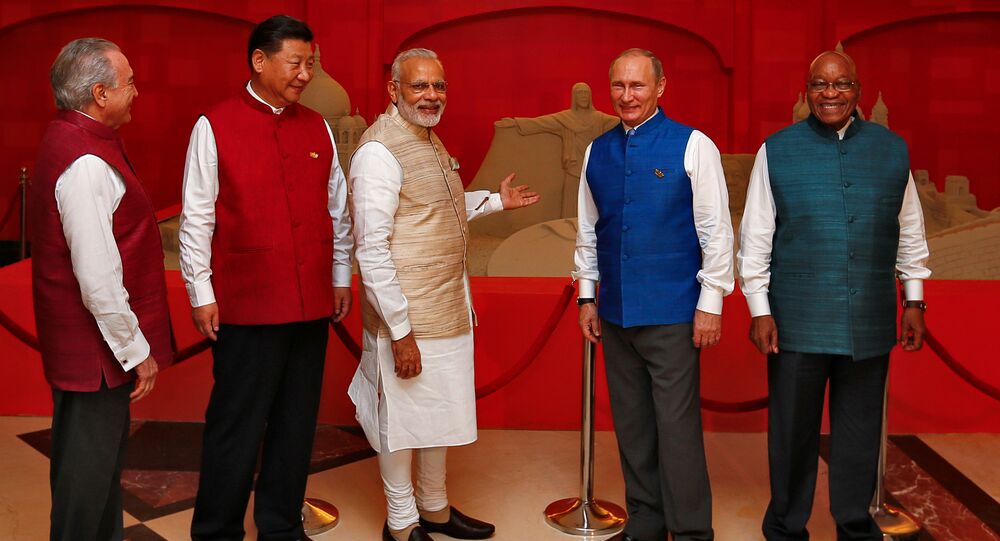 BRICS Plus: 'the Bloc That Will Dominate the World'

The proposed enlargement of BRICS (BRICS Plus) with the inclusion of powerful emerging economies would help fill the void created by US trade protectionism, international analyst Adrian Zelaia told Sputnik.

Host photo agency
BRICS 2017: China Releases Theme, Priorities of Xiamen Summit in September
Having analyzed Beijing’s idea to bring Pakistan, Bangladesh, Iran, Nigeria, South Korea, Mexico, Turkey, Indonesia, the Philippines and Vietnam into the BRICS group, consisting of Brazil, Russia, India, China and South Africa, Zelaia, the president of Ekai Center consulting company, concluded that this could come as a response to Washington’s decision to pull out from the Trans-Pacific Partnership agreement.

“The dissolution of the TPP, established to maintain US domination in Asia, created a void BRICS can now move in to fill and play a bigger role among the emerging economies,” Zelaia said in an interview with Sputnik Mundo.

He added that BRICS, which until now served as “a symbolical counterbalance to the West,” could now become “a leader of the global economic order” and could eventually dominate the global economy.

“The BRICS countries use a development model that, apart from trade, also prioritizes strategic investments into future progress. Most of the new inclusions are part of the New Silk Road project of Eurasian investments in infrastructure and communications,” Adrian Zelaia noted.

“This infrastructure would kick-start a Chinese model of development where money lost by one country does not necessarily make the other country richer. Instead, it encourages everyone to come up with new ideas and generate projects that benefit all,” he added.

It looks like the proposed enlargement of the five-nation BRICS will not be an easy ride though. India, for one, is wary of the inclusion of new countries, some of which share common borders with India and have strained relations with New Delhi.

© Sputnik
Potential Pakistan Entry in BRICS Via China’s BRICS Plus Leaves India Concerned
“This could prove a serious hurdle now that China’s economic might makes generating new partnerships easy, while India is virtually unable to look for potential candidates among its allies. Which means that an ideal option will be hard to find,” Adrian Zelaia said in conclusion.

The concept of BRICS Plus within BRICS, the brainchild of Chinese Foreign Minister Wang Yi, has put India on the back foot, primarily since the Plus grouping could mean an invite for rival Pakistan into the five-nation group.