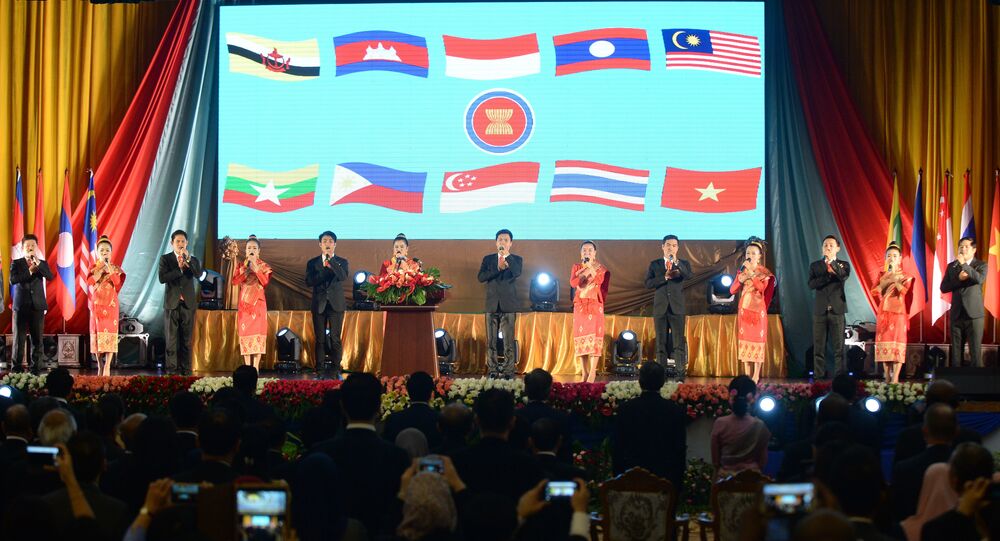 Kiren Rijiju, India's Minister of State for Home Affairs, said India was eager to consolidate its partnership with Indonesia, the largest nation in South East Asia, to cement its ties with the ASEAN bloc.

NEW DELHI (Sputnik) — The Indian minister said that India recognized Indonesia's role in ASEAN (Association of South-East Asian Nations) and appreciated its strong commitment to regional peace and security. Rijiju said this during his meeting with Indonesia's Coordinating Political, Legal and Security Affairs Minister Wiranto, who is leading an Indonesian delegation to India.

Rijiju and Wiranto discussed cooperation in security and counter-terrorism matters. Both sides also showed a keen interest in increasing ties in intelligence-sharing and cyber security.

© AP Photo / Anjum Naveed
Meeting of Special Committee on Creation of Asian Parliament Starts in Pakistan
​"The fact is that India wants to increase its sphere of influence in South East Asia for strategic reasons. In fact, India's main objective is to counter China and ASEAN is crucial for that. ASEAN is an important part of India's Asia-Pacific vision of rule-based security architecture. For India, a strong posturing at ASEAN provides a chance to become a strong regional player, which India needs. Further, ASEAN countries have maritime disputes with China and these nations look towards India as a counterbalance against Chinese hegemony," Anuradha Chenoy, Professor of International Studies, Jawaharlal Nehru University, told Sputnik.

In a speech to the Davos World Economic Forum, Chinese President Xi Jinping outlined plans to expand the Regional Comprehensive Economic Partnership (RCEP). The agreement is currently under negotiation between the ten member states of the Association of Southeast Asian Nations (ASEAN), and six states which are currently free trade partners of ASEAN (Australia, China, India, Japan, South Korea and New Zealand).