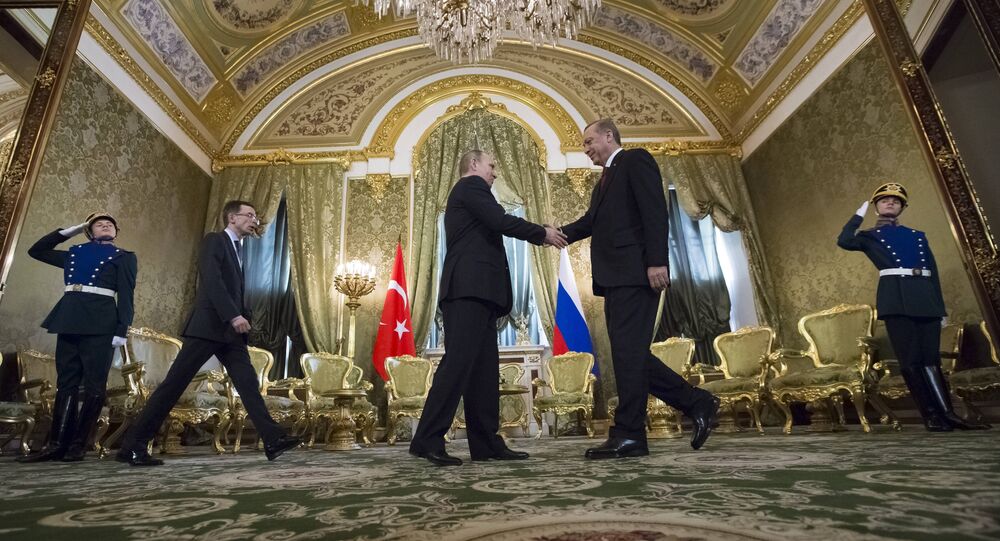 The leaders of Russia and Turkey have a common understanding of the need to coordinate actions related to military coordination in Syria, Kremlin spokesman Dmitry Peskov said Tuesday.

MOSCOW (Sputnik) — These issues were raised at a recent meeting of Russian and Turkish presidents Vladimir Putin and Recep Tayyip Erdogan, he said.

"These issues were touched upon, and there is a common understanding of the need to coordinate such actions," Peskov told reporters.

© REUTERS / Osman Orsal
Putin Does Not Rule Out Involvement of the US in Joint Efforts on Syrian Settlement
Russian President Vladimir Putin met with his Turkish counterpart Recep Tayyip Erdogan in Moscow on March 10.

Erdogan visited Moscow for the Russia-Turkey High-Level Cooperation Council (HLCC), co-chaired by him and Russian President Vladimir Putin, on Friday. The sides signed a number of documents, including a 2017–2020 mid-term trade, economic, scientific, technical and cultural cooperation program, several memorandums of understanding and an agreement to set up a joint investment fund.

The previous HLCC meeting took place in December 2014, but was followed by a deterioration of relations after the November 2015 downing of a military Russian aircraft by the Turkish Air Force over Syria. In June, tensions began to thaw since the Turkish president apologized in a letter to the Russian president for the incident and offered his condolences to the family of the killed Russian pilot.

Putin, Erdogan Seek to Collaborate on Syrian Peace Accord