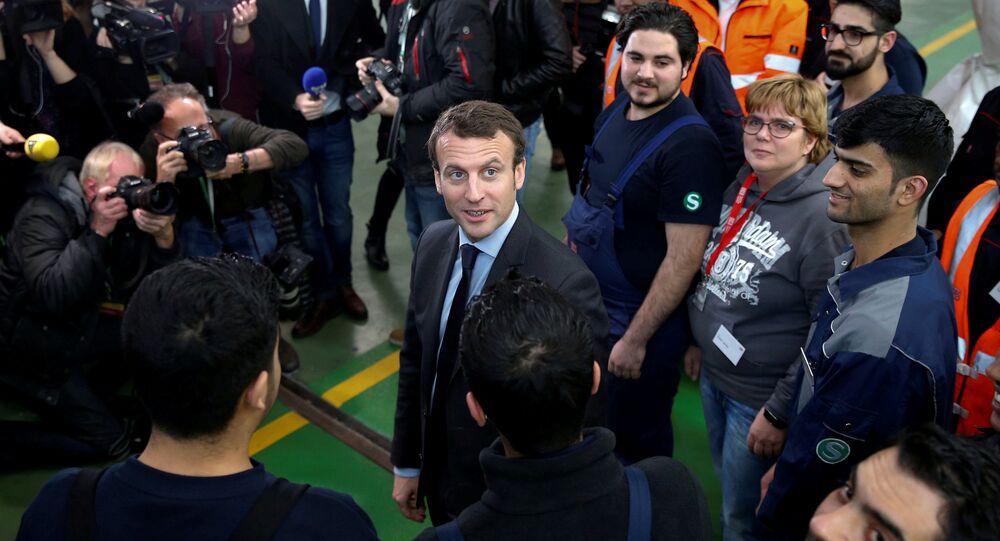 French Election: What Makes Macron Frontrunner and What Could Let Him Down

French independent presidential candidate Emmanuel Macron's rise to prominence ahead of this year's presidential election has been driven by the disarray in the opposing Socialist and center-right camps, Sophie Montel, a lawmaker from the National Front party, told Sputnik, adding that the electorate will eventually be disappointed in him.

The Republicans' candidate Francois Fillon has been battered in the polls after the "penelopegate" scandal involving his wife's fake employment, while Socialist candidate Benoit Hamon's initially low support fell from around 18 percent to 14 percent by February after he failed to make public appearances during his campaign.

"Francois Fillon's campaign is in turmoil, the official socialist candidate has disappeared, this is the prefect recipe for an ideologically-inconsistent and at times contradictory man such as Macron to succeed… In that regard, Macron is indeed an ideal candidate: liberal on society matters which is all leftists now care about, liberal on economics and pro-European, which is important for the centrist electorate," Montel said.

According to Montel, success of Macron at the moment owes itself to his being "a fresh face" but the situation may change over the issue of the former investment banker’s declaration of finances.

"[People] will see that he is responsible for [French President Francois] Hollande's disastrous results … They will wonder why he declared a negative net worth while earning 3 million euros [roughly $3.2 million] as a banker for Rothschild," Montel added.

Montel said that National Front (FN) party leader Marine Le Pen was still capable of winning the first round of the presidential vote and the main challenge for her would be to transform popularity of her ideas among French citizens into votes.

© REUTERS / Eric Feferberg/Pool
'I'm Not Leaving the Ship in the Storm': Ex-French PM Juppe Confirms Support for Fillon
Macron served as the minister of economy under incumbent President Francois Hollande in 2014-2016. During Hollande's presidency, France faced surging unemployment and the economy is likely to play an important role in guiding voters' preferences.

Several French media, including Mediapart and Le Nouvel Observateur, questioned Macron's declaration of finances for when he entered public sector, considering that previously, while employed at Rothschild & Cie, he is estimated to have earned a significant sum.

The first round of the French presidential election is slated for April 23, while the run-off between the top two candidates is expected to take place on May 7. The latest polls indicate that Macron and Le Pen have equal chances of winning the first round with 26 percent each, with Macron the likely winner of the run-off by a margin of approximately 60 to 40 percent.