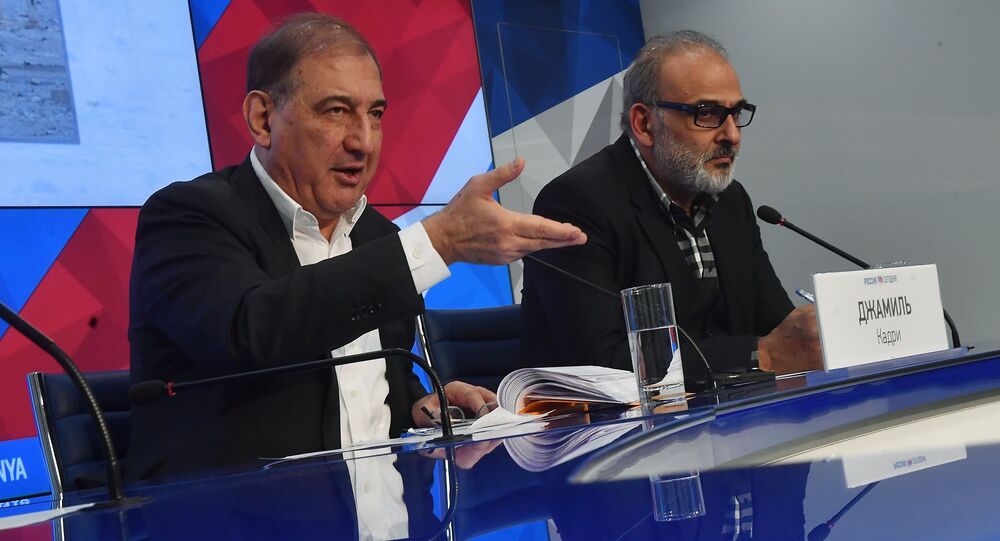 Russia Did Not Impose Draft Constitution on Parties to Syrian Conflict

Qadri Jamil, a leader of Syria's Popular Front for Change and Liberation, stated that the upcoming intra-Syrian talks in Geneva, due in February, should be direct, adding that this should be achieved in the interest of the Syrian people.

© Sputnik / Bolat Shayhinov
Lavrov: Parties Interested in Resolving Syrian Crisis Should Engage in Talks
MOSCOW (Sputnik) — Moscow has not imposed on Damascus its draft constitution, the Russia-proposed draft is not the only one, different options can be discussed, Qadri Jamil, a leader of Syria's Popular Front for Change and Liberation, said Monday.

"Not this constitution will be submitted to the nationwide discussion, to the referendum. The constitutional commission will be guided by a draft that is in the interest of the country," Jamil said at a news conference in the Rossiya Segodnya International Information Agency.

"No variant may be imposed… But we thank the Russian friends for their work to make the draft… All this will be discussed, and therefore it should not be said that Moscow imposed something on Damascus, this is not true," he said.

© Sputnik / Iliya Pitalev
Russia, Iran Agree Astana Talks 'Efficient Platform' for Syrian Settlement
Jamil said the upcoming intra-Syrian talks in Geneva, due in February, should be direct, adding that this should be achieved in the interest of the Syrian people.

The Astana talks on Syria were held on January 23-24. They were initiated by Russian President Vladimir Putin, who proposed establishing in Astana a site of the Syrian peace process in addition to Geneva. The proposal was supported by the presidents of Turkey and Kazakhstan.

As a result of the talks held in the capital of Kazakhstan, Russia, Iran and Turkey — the three guarantors of the Syrian truce — decided to establish a trilateral mechanism to monitor the ceasefire. Russia handed the parties to the negotiations a draft Syrian constitution developed by Moscow.

Armed groups should be present at the upcoming intra-Syrian talks in Geneva as part of a unified opposition delegation, according to Jamil.

"The armed opposition must be present [at the talks] in Geneva, at least due to the fact that they represent large groups of armed persons. There may be roughly about 45 representatives — several people from [each of] 15 groups. There should be one opposition delegation," Jamil said  at a news conference in the Rossiya Segodnya International Information Agency.