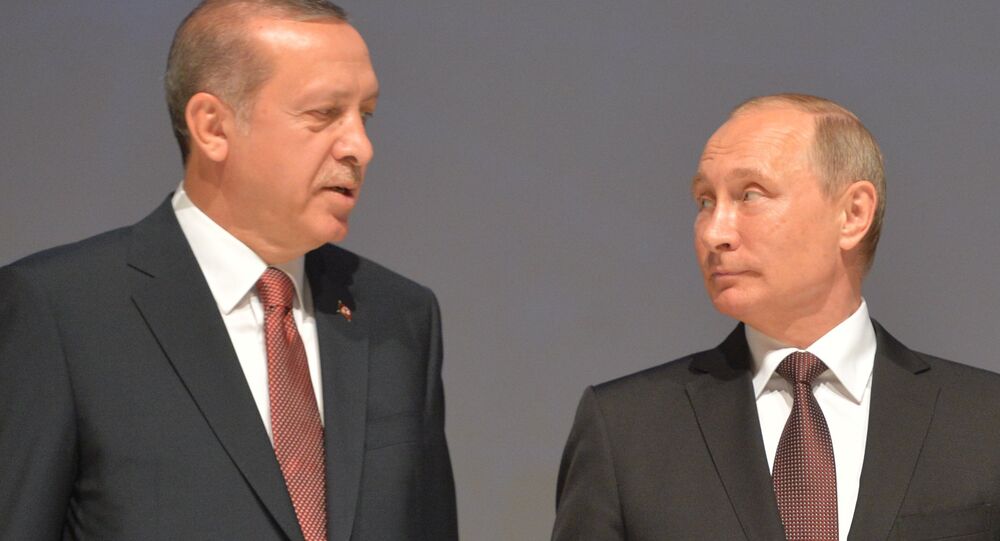 MOSCOW (Sputnik) — Kremlin spokesman Dmitry Peskov reaffirmed that Putin and Erdogan would discuss the situation in Aleppo on Wednesday evening in phone talks.

"Yesterday a truce was agreed, and we hoped the process of evacuation of residents from Eastern Aleppo will start today, but shells were fired again. Today evening, I will have phone talks with Putin again," Erdogan said.

© Sputnik / Michael Alaeddin
Bus Convoy Waiting to Take Last Group of Militants out of Aleppo
Over the recent months, Aleppo became a major battleground in Syria between government forces and militants. On Tuesday, the Russian reconciliation center said that the Syrian army was controlling over 98 percent of the territory of the embattled city, with militants present in less than 3 square kilometers (1.1 square mile).

On Tuesday, the Turkish Foreign Ministry said in a statement that a ceasefire had been reached in eastern Aleppo as a result of negotiations between representatives of the Russian military and the Syrian opposition.

Earlier on Wednesday, the Russian reconciliation center said that the militants in Aleppo violated the agreement reached with the Syrian authorities on leaving the city and used the ceasefire to regroup and begin hostilities again. When the transport arrived at the previously agreed place, the militants began shelling the convoy.

According to the statement, the army repelled the attack and continued the operation to liberate eastern Aleppo.

Aleppo is Liberated From al-Qaeda & Friends as US Government Fumes