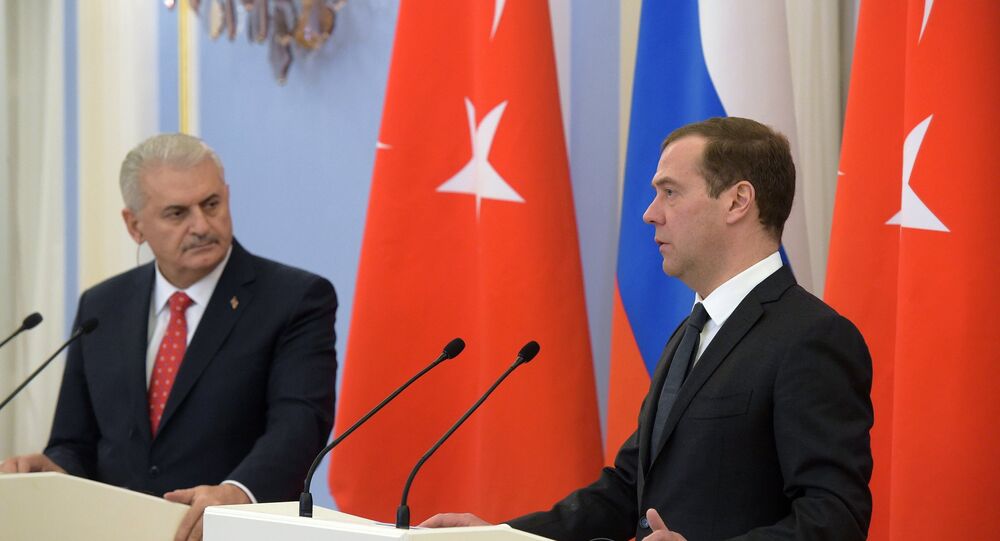 The normalization of the situation in Syria is a priority task for Russia and Turkey, Russian Prime Minister Dmitry Medvedev said Tuesday after talks with his Turkish counterpart Binali Yildirim.

"We with the [Turkish] prime minister have talked about the Syrian issue and stated that the normalization of the situation in Syria is a priority task for our countries and will certainly benefit the entire region," he said.

© REUTERS / Mikhail Klimentyev/Kremlin
Iran, Russia Believe Turkey Should Adhere to Previously Agreed Position on Syria - Iranian Diplomat
The dialogue between Russia and Turkey on the situation in Syria has been completely restored and it will resume on all levels, Medvedev said.

"At the moment, it [the Moscow-Ankara Dialogue on Syria] has been fully restored. We have the same understanding of the terrorist threat and I'm sure this kind of dialogue between Russia and Turkey will be continued, including consultations on all necessary levels."

"As for the humanitarian situation and other issues including anti-terrorism fight and fight against terrorist groups, which have found refuge on the Syrian territory, this is the question on which communication exists not only between presidents of our countries but between military personnel and other services that should work on this issue."