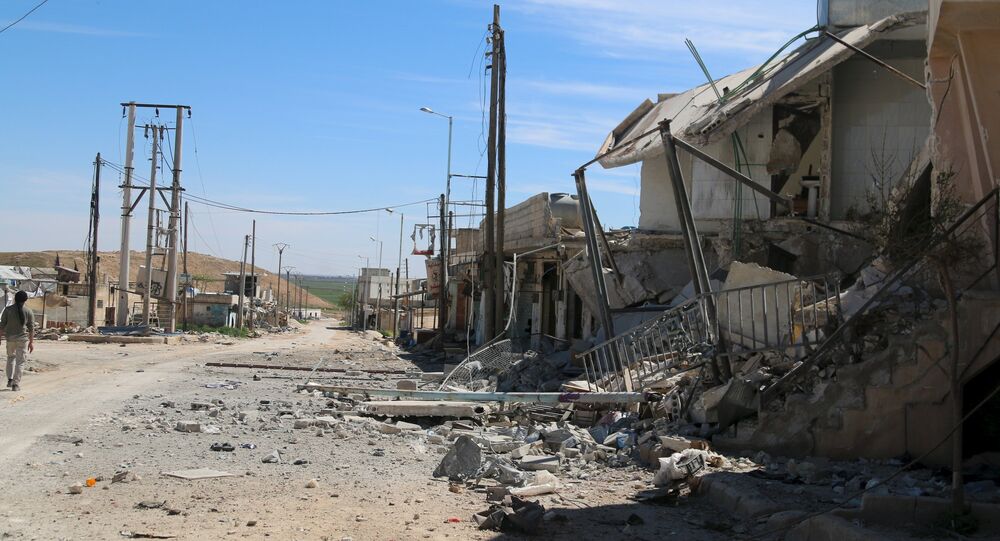 For objective probe in incident with attack on UN humanitarian convoy in Syria it is necessary to find and examine ammunition used to hit the convoy, Russian Foreign Minister Sergei Lavrov said.

In order for the investigation of the incident with the humanitarian convoy in Syria to be considered objective, the ammunition used on it must be shown, Sergei Lavrov said during an interview with the TV channel Rossiya-1.

"Now it is necessary to conduct an investigation. Probably the easiest way and the very first step that should be made is to [examine] the ammunition that was used [during the attack] on the convoy," Sergei Lavrov said.

© AFP 2019 / Omar haj kadour
US Still Blames Russia for Aleppo Convoy Attack Despite No Evidence
"First there appeared information claiming it was hit with artillery, and then this information disappeared. After that people spoke about helicopters; I think everyone would be able to understand what happened if we were able to see the ammunition."

A UN-Syrian Arab Red Crescent convoy carrying humanitarian aid for Syria's Aleppo province was attacked late on Monday, according to the International Federation of Red Cross and Red Crescent Societies (IFRC). As a result, 18 of 31 trucks were destroyed and at least 21 individuals were killed.

"The Syrian government has confirmed its readiness to cooperate on the issue. But the same day, those who control eastern Aleppo and call themselves 'the local council' said that if the convoy went via Castello road they would attack it," Lavrov told Rossiya-1 broadcaster in an interview.

Millions of Syrian people remain in urgent need of humanitarian aid that cannot be delivered due to continuous fighting. According to the United Nations, around two million people need humanitarian assistance in the Syrian city of Aleppo, which has seen intense fighting in the past several weeks.

Several western officials, including the ones from the White House, have blamed the attack on Russia and Syria. The Russian authorities have refuted the allegations.

Meanwhile, the United States has apologized to Syrian President Bashar Assad for the airstrike on the Syrian Army positions in Deir ez-Zor.

"Yes, they have apologized," the Russian Foreign Minister said.

© AFP 2019 / AHMAD ABOUD
Deir ez-Zor Attack 'Further Poisoned Mistrustful Relations' Between US, Russia
On September 16, airplanes from the US-led coalition against Daesh hit Syrian army positions at a military airport near Deir ez-Zor, which is besieged by the terrorist group.

Speaking about the Russia-US Syrian ceasefire agreement, Lavrov said that Moscow is not concerned that the US administration change would lead to the failure of its' implementation.

"No, we have not had such discussions," Lavrov told Rossiya-1 broadcaster in an interview.

He added that Russia "is not into crystal ball gazing but actual work. There is an agreement between the two presidents and it must be implemented."

But restoring truce in Syria is possible only on a collective basis, with no unilateral demands, Russian Foreign Minister Sergey Lavrov said.

"It is possible to speak now about resuscitation of the ceasefire [in Syria] solely on a collective basis, when it is not us who has to prove anything to anyone unilaterally, but when it must be proven to us that the desire to differentiate the opposition, which cooperates with US coalition, from the Nusra Front [militant group currently known as Jabhat Fatah al Sham], is sincere," Lavrov told the Rossiya-1 channel in an interview.

US Still Blames Russia for Aleppo Convoy Attack Despite No Evidence

By Blaming Russia for Syrian Human Convoy Attack, US 'Hides Its Own Mistakes'