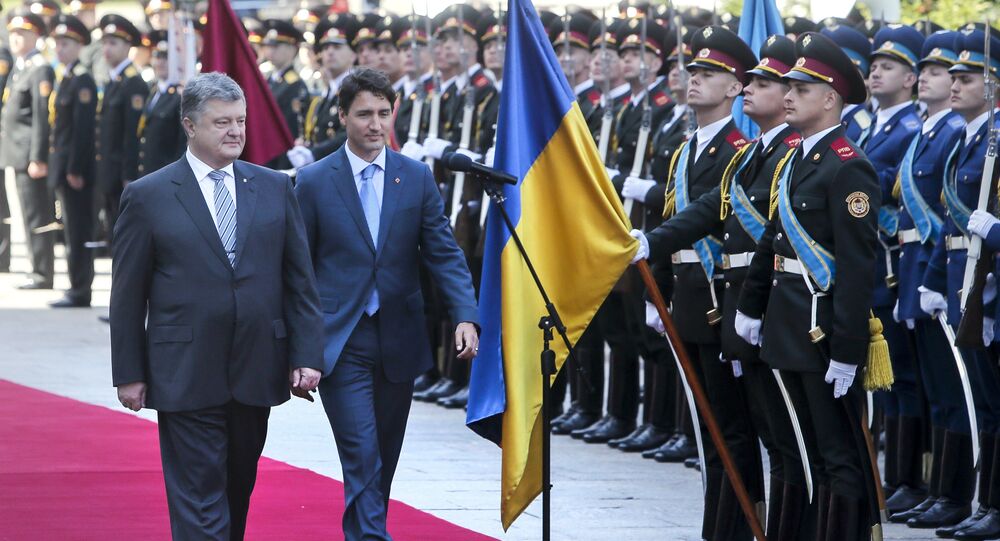 Canadian Prime Minister Justin Trudeau arrived in Ukraine on Monday on his first visit to this country after having attended the July 8-9 NATO Summit in Warsaw; “with 1.3 million Canadians of Ukrainian origin, he has no choice but to carefully maintain this relationship,” Radio Canada commented on the trip.

© AP Photo / SERGEI SUPINSKY
Canada, Ukraine Sign Free Trade Agreement
Justin Trudeau has arrived in Kiev to meet with President Poroshenko. The move is seen by a sizeable Ukrainian minority in Canada as a "gesture of support” towards their country, according to Radio Canada’s website.

The outlet reminded that “under the Conservative government, the Ukrainian community has received unwavering support” since the onset of the military conflict in the southeast of the country.

“In 2013, the image of the foreign minister at the time, John Baird, in Kiev among demonstrators demanding a new government was the symbol of this strong relationship,” it added.

However, after the Liberal Party won a surprise majority in parliament in 2015, Canada's foreign minister Stéphane Dion seemed to signal a shift in relations with Russia.

"Canada's severing of ties with Russia had no positive consequences for anyone," Dion reiterated in March, "not for Canadians, not for the Russian people, not for Ukraine and not for global security."

"Canada must stop being essentially the only one practicing an empty chair policy with Russia, because by doing so, we are only punishing ourselves," he added.

© AFP 2020 / FABRICE COFFRINI
Breaking the Ice: Why the Thaw in Relations Between Russia and Canada is Important
The top diplomat referred to the "empty chair" policy, the 2014 decision by the Harper government to refuse to chair or host — or sometimes even participate in — multilateral meetings at which a Russian delegation was present.

Dion said the policy left Canada with a diminished role at venues such as the OECD (Organization for Economic Co-operation and Development), the International Atomic Energy Agency and international fisheries talks, where other countries were debating issues important to Canada.

"Cooperation is often in our interest — on environmental issues, for example — given that we are Arctic neighbors, facing similar challenges due to our shared geography. It makes no sense to prevent our scientists from working with their Russian colleagues to protect the northern ecosystem," Dion then said.

The foreign minister also stressed that “Canada's confrontational attitude to Russia had brought no benefit to Ukraine."

However, the stubborn, silent approach was advocated by Ukrainian Ambassador to Canada Andriy Shevchenko, who said that Ottawa has “nothing to talk about with Moscow.”

"Ultimately, it is a moral choice. Ottawa needs to choose sides," Radio Canada’s website quotes him as saying.

© REUTERS / Ezra Acayan
New Canadian Government Gives Hope to Improve Russia-Canada Bilateral Ties
The website also notes that the Ukrainian Canadian Congress (UCC), which describes itself as “being the representative of the Ukrainian Canadian community before the people and Government of Canada,” has pushed Canada to provide lethal weapons to the Ukrainian armed forces and to add Ukraine to the list of countries to which it can export automatic weapons.

The UCC expects the issue to be raised during the meeting of the two leaders in Kiev.

Finally, Prime Minister Justin Trudeau has overseen the signing of a free trade agreement with Ukraine after years of negotiations.

Ukrainian officials are hoping the accord will spark an influx of Canadian investment for their country's struggling economy.

“With 1.3 million Canadians of Ukrainian origin, [the Canadian Prime Minister] has no choice but to carefully maintain this relationship,” Radio Canada’s website finally states.

Canada to Discuss Extension of Training Mission in Ukraine - Commander

Canada ‘Not in Direct Talks’ With Ukraine on Lethal Aid Provision