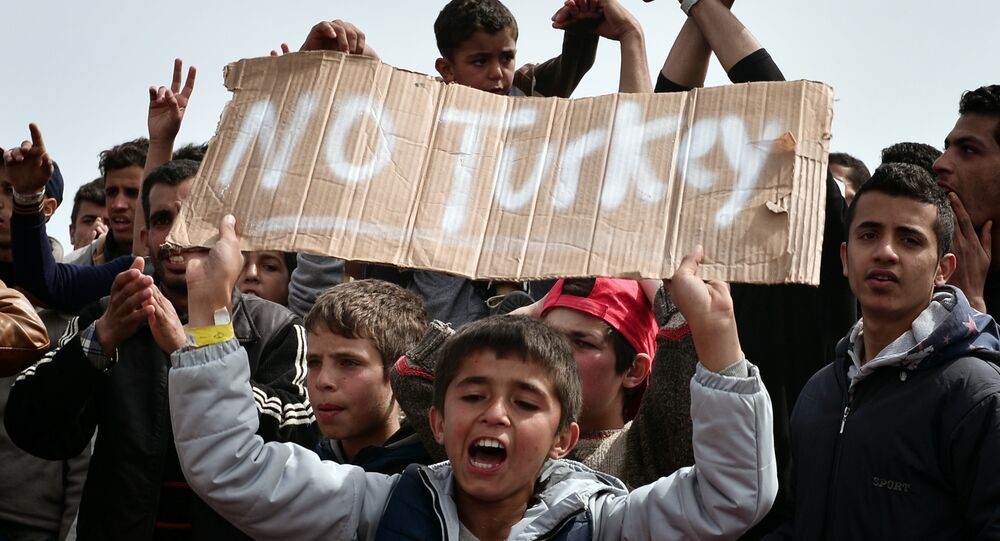 As the failure of a €6 billion ($5.3 billion) deal between Brussels and Ankara looms, Turkey is resorting to blackmail, threatening to deluge Europe with a wave of migrants in the event Turks aren’t granted access to visa-free travel in the EU.

The ultimatum was tweeted by Burhan Kuzu, President Erdogan’s "honorary adviser" and a member of Turkish Ruling Party AKP, earlier this week.

“The European Parliament will discuss the report that will open Europe visa-free for Turkish citizens. If the wrong decision is taken, we will send the refugees,” the Twitter post reads.

© AFP 2021 / ADEM ALTAN
Erdogan Slams EU: 'Gays, Turtles More Important to the West Than Syrians!'
In a later interview by phone with Bloomberg, Kuzu reiterated his position, stressing that “If Turkey’s doors are opened, Europe would be miserable.”

Kuzu’s sentiments were met with harsh criticism in the European Parliament.

Sophie In't Veld, a MP from the Alliance of Liberals and Democrats, accused Erdogan of attempting to take advantage of weakness and divisiveness within the bloc that has so far failed to adopt “genuine European asylum and migration policy.”

© Sputnik / Ruslan Krivobok
Erdogan Dreaming to 'Revive New Ottoman Caliphate'… in Europe
Earlier, the President of the European Parliament Martin Schulz said that Turkish citizens would be granted visa-free entry if Ankara fulfilled all EU requirements. The country’s Minister of European Union Affairs Volkan Bozkır also said that this part of requirements has no connection with the visa-free deal.

According to Bloomberg, Erdogan has also declined to provide with data on housing and education projects that are expected to be paid for by the EU.

“Are you kidding us? What projects?” Erdogan said. “There will be no projects, there are 25 camps out there.”

According to Ria Novosti’s source in the European Council, officials have already begun registration of visa-free travel for Turks, despite Ankara’s lack of compliance with the requirements.