Turkish Prime Minister Ahmet Davutoglu’s resignation is not only an attempt by President Recep Tayyip Erdogan to solve his problems and accumulate more power in his hands but also a signal to Russia, political analyst Yuri Svetov said.

Davutoglu’s resignation has placed in doubt the migrant deal between the EU and Turkey, The Financial Times reported. Brussels is concerned that now the Turkish government will not implement the reforms required for financial aid and a visa-free regime with the Schengen zone. 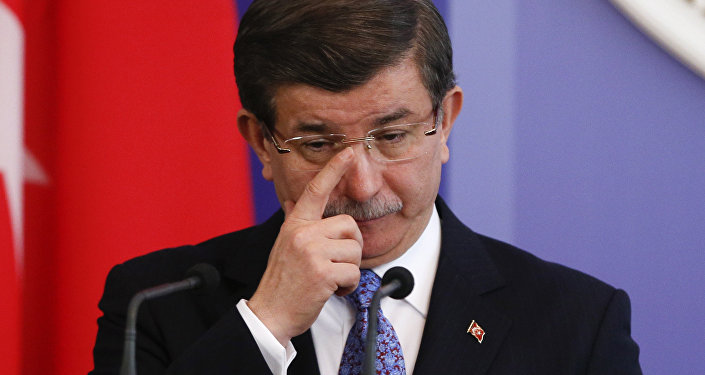 © REUTERS / Gleb Garanich
How Washington's 'Trouble-Making' Brought About Turkish PM Davutoglu's Downfall
"The premier’s departure imperils an agreement credited with sharply reducing the influx of asylum-seekers into the EU — and rescuing Merkel from potentially fatal political backlash," the article read.

According to diplomatic sources, Merkel counted on the pro-European party led by Davutoglu. But finally, the migrant deal has weakened the positions of pro-European politicians in Turkey.

In fact, the resignation can create obstacles for the migrant deal, Svetov underscored.

"I think that Erdogan’s impulsiveness and his lack of sober vision of the global situation may result in difficulties for the migrant deal. Before becoming prime minister, Davutoglu was foreign minister, and he knows his counterparts. In many aspects, this deal was the result of his work. Erdogan was jealous, because he still wants to be the absolute ruler of Turkey. As a result, Davutoglu was forced to resign," the analyst told Sputnik Radio.

Erdogan considered Davutoglu’s pro-European stance a threat and an attempt to replace him in the international arena, according to the Financial Times.

© REUTERS / Umit Bektas
EU, Turkey Must Not Let Davutoglu Resignation Affect Refugee Deal – Berlin
"He is obviously trying to centralize as much power as possible to himself and his presidential position. So many people are seeing this as an attempt to move Turkey into a dictatorship," journalist William Whiteman told Sputnik Radio.

According to Svetov, if Erdogan seizes absolute power in Turkey he will continue to "twist Brussels’ arms."

After Davutoglu’s resignation, many experts said that Erdogan’s son-in-law Berat Albayrak would be appointed as prime minister.

"If Albayrak is appointed Erdogan will be the full-fledged sultan of Turkey and will dictate terms to the EU," the analyst suggested.

At the same time, the analyst noted that Davutoglu’s resignation may be a gesture toward Russia.

"Media reported that it was Davutoglu who ordered to shoot down the Russian bomber in Syria. Probably, his resignation is Erdogan’s signal to Russia. It may be an attempt to shift responsibility for the incident to Davutoglu in a bid to restore ties with Moscow. Probably, Erdogan thinks that Russia will have dialogue with the new Turkish prime minister," Svetov said.