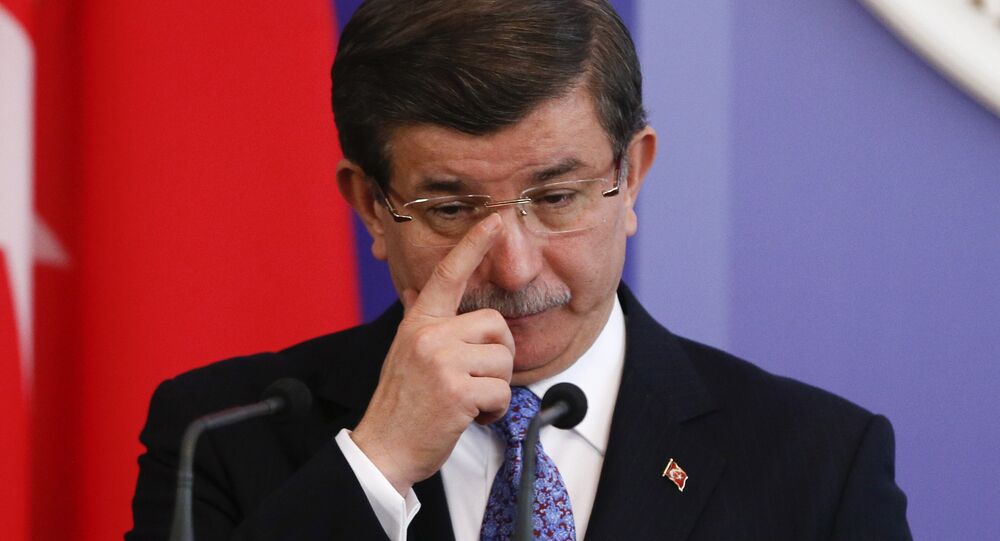 "Possibly the most crucial event that escalated the Erdogan-Davutoglu tension was trouble-making by the Americans. The word in Ankara is that the cold shoulder Erdogan received in Washington got even colder with the warm American treatment for Davutoglu," she noted.

© AFP 2020 / Yasin Bulbul/Presidential Press Service
'Attempt to Move Turkey Into Dictatorship': Davutoglu’s Forced Resignation
Washington might see things differently, but it is Ankara's view that matters in this context and the Turkish strongman had grounds to be concerned.

Erdogan's recent visit to Washington did not go particularly as planned. The Turkish president travelled to the US to take part in the Nuclear Security Summit, but he also wanted to meet with Obama. The White House refused to accommodate Ankara's request. This came in sharp contrast to Erdogan's state visit to Washington in 2013 and the overall tone of relations.

Davutoglu was expected to come to the US on May 5.

"Erdogan's camp feared a possible victory lap by Davutoglu, after which he would try to maximize some of his more formal powers as prime minister. In order to prevent a power grab, it looks like Erdogan put Davutoglu's termination on fast track and pulled the plug on him while he was visiting Doha, Qatar," Tremblay explained.

© AFP 2020 / STR
Trouble in Paradise: Real Reason Behind Davutoglu's Resignation
The Turkish prime minister was initially stripped of his right to appoint provincial and district heads. He then said that he would not run for the chairman of the ruling Justice and Development (AK) Party.

Davutoglu is believed to be the person responsible for Ankara's failed Syria policy. If so, his departure will provide an opportunity to change the course that would lead to improved relations with Russia among other things, the analyst noted.

Ankara's relations with Moscow sharply deteriorated after a Turkish F-16 fighter jet shot down a Russian Su-24 bomber out of the Syrian skies, citing airspace violations. The military aircraft, Russian officials and the copilot have said, never crossed into Turkey.

'We Did Russians Great Injustice': Moscow is not Turkey's Enemy, Daesh is