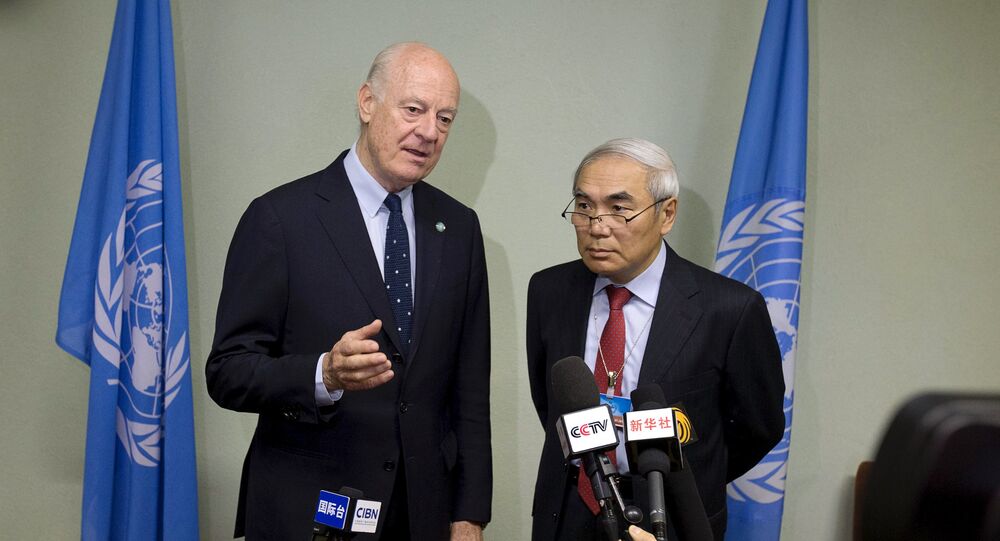 Fight Against Terrorism in Syria Should Continue - China's Special Envoy

China’s Special Envoy for Syria thinks that the fight against terrorism in Syria must continue.

© AFP 2021 / FABRICE COFFRINI
Chinese Special Syria Envoy Calls on Sides to Peace Talks Not to Leave
GENEVA (Sputnik) – The fight against terrorism in Syria must continue, while intra-faction fighting in the country is "not helpful," China’s Special Envoy for Syria Xie Xiaoyan told Sputnik on Monday.

"I think the emphasis should be on continued dialogue. And not talking about the pull out or going back to the battleground. The facts that there are sporadic fighting are not helpful. But this is different from a fighting against terrorists inside the country. That should continue and be reinforced. Because terrorists are the enemies. So that's the different story," Xie said on the sidelines of the intra-Syria talks in Geneva.

China expects that all sides to the Syria conflict taking part in peace negotiations in Geneva will respect the ceasefire deal, China's Special Envoy for Syria Xie Xiaoyan said.

"I think that everyone should be serious about fully complying with the ceasefire agreement," Xie said.

Xie Xiaoyan expressed hope that efforts for achieving the Syrian settlement would continue even if the ongoing round of peace talks were to fail.

"Even if there is no breakthrough during this round, incremental progress can be achieved and prepare for the next round. If this round is not the end, then we will have another round. Until finally we achieve the goal of forming the transitional authority," Xie said.

At the same time, the envoy thinks that the adoption of a new UN Security Council resolution on Syrian settlement might be "a difficult task."

© Sputnik / Iliya Pitalev
Lavrov: Russia, US Holding No Secret Talks on Syria in Geneva
"I think it's a difficult task. And not only for Mr. [UN Special Envoy for Syria Staffan] de Mistura but also for the UNSC because different parties have different positions and views on this very important issue. But that doesn't mean that we shouldn't continue to work on it," Xie said.

A US-Russia-brokered ceasefire came into force across Syria on February 27. It was supported by Damascus, as well as by dozens of opposition groups on the ground. The Islamic State and the Nusra Front militant groups both outlawed in Russia, were not included in the ceasefire deal.