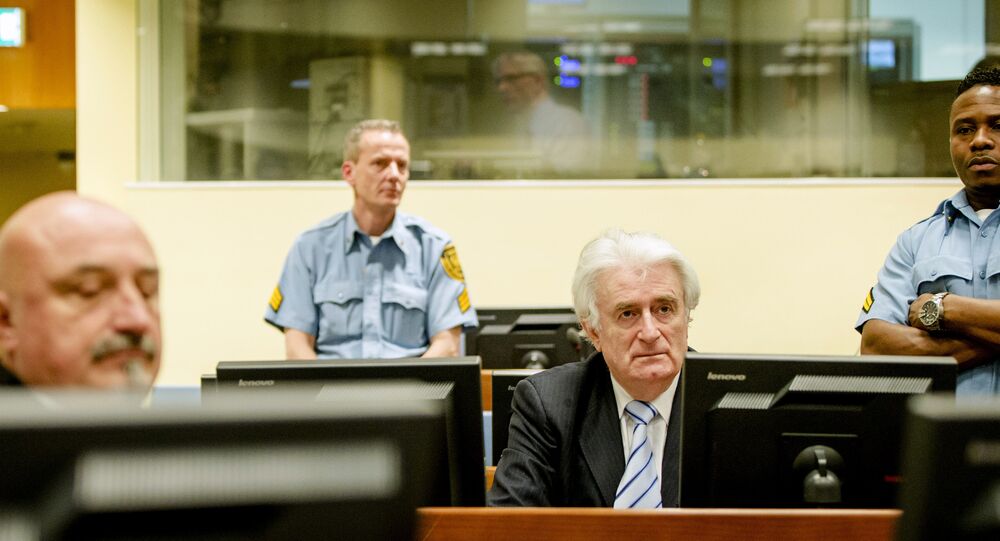 The conviction of former leader of Republika Srpska Radovan Karadzic by UN judges clearly indicates that Western powers are using the International Criminal Tribunal for the former Yugoslavia (ICTY) to justify their own flawed decisions made during the Bosnian War, Serbian-American writer Srdja Trifkovic told Radio Sputnik.

Karadzic, who was sentenced to 40 years in jail on Thursday, had been presumed guilty by the ICTY even before being arrested in 2008, Trifkovic claimed.

“The key points in the verdict had been prepared well in advance with previous sentences against General [Radislav] Krstic, when so-called Srebrenica genocide was quasi-legally verified. This is logical outcome of a politicized tribunal with politicized proceedings,” he said.

© REUTERS / Robin van Lonkhuijsen/Pool
Moscow: Karadzic Sentencing Too Harsh, Looks Like Score-Settling
The decision on Karadzic’s case points to the attempts by the Western powers to downplay the Dayton Accords that ended the bloodshed conflict in 1995 and recognized Republika Srpska as an autonomous entity within Bosnia and Herzegovina, the expert continued.

“This will be used with the previous verdicts as justification for sustained attempts by the enemies of Republika Srpska to delegitimize its existence,” Trifkovic pointed out.

“This is selective justice by tribunal which has a clear brief to provide the Serbian guilt as an attractive justification for political decisions made at the time.”

© AFP 2021 / MICHAEL KOOREN
Who is Radovan Karadzic? Seven Unknown Facts About One of the World’s Most Wanted Man
He added that the goal of such manipulations is to make up “Bosnia and Herzegovina as a more or less unified and more or less unitized state in which, by virtue of their members, the Muslims will have pre-dominance.”

While judging the former leader of the Bosnian Serbs using ICTY, the West hypocritically turned a blind eye to the conditions of the Bosnia and Herzegovina’s secession from Yugoslavia, an expert underscored.

“The whole show, the Hague tribunal has the task of providing legal justifications for the decisions made by Western political powers in 1990s,” Trifkovic stressed. “Nobody at The Hague’s is discussing the circumstances that led to civil war in Bosnia.”

In 1992, Warren Zimmermann, then-US ambassador in Belgrade, traveled to Sarajevo and urged then-Bosnian leader Alija Izetbegović to reject the EU’s plan aimed to prevent the looming war in Bosnia before the first shot was fired.

© AFP 2021 / Robin van Lonkhuijsen / POOL
Not All Are Equal Before the Law: High-Ranking Bosnian Serb Politicians Discuss Karadzic’s Sentence
Trifkovic suggested that, except Serbs, only Russians could voice the protest over “quasi-legal proceedings of The Hague” and consider them as a danger for international laws. He said that ICTY has turned into a tool of imposing the will of Western powers on other states.

“[A]nyone connected with any political structure that is inconvenient to the Western powers can be criminalized [through ICTY]. It’s not the matter of committing real war crimes; it’s the matter of collective guilt because of [what] you do [may] not belong to the ‘right side’ of history.”

The Bosnian War followed the secession of Bosnia and Herzegovina from Yugoslavia. Bosnian Muslims, Serbs and Croats took part in the warfare that lasted for some four years and resulted in around one hundred thousand of casualties.

Karadzic Sentencing May Cast Doubts on Future of Republika Srpska