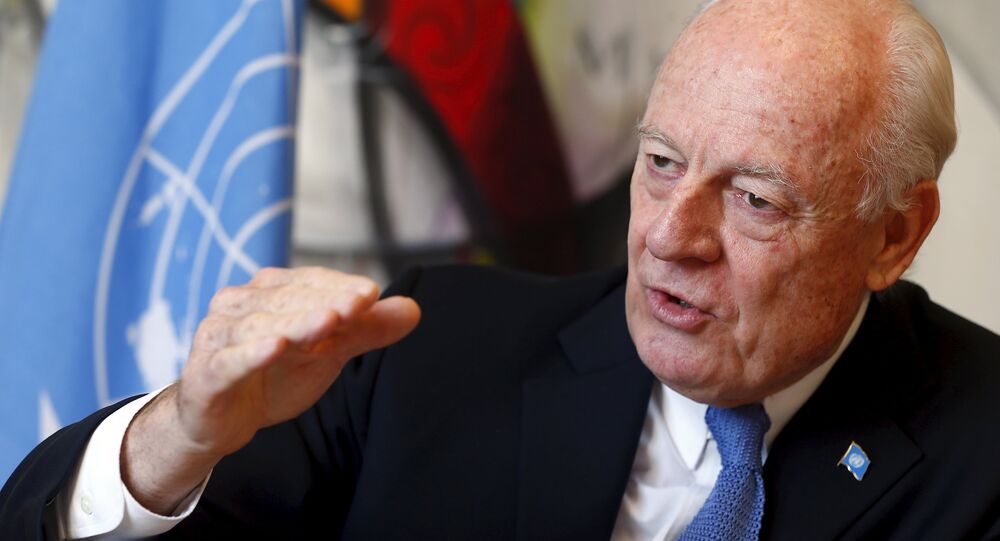 The new Syrian opposition group formed at the Hmeymim air base will share its views on the country's future with the UN special envoy on March 18.

GENEVA (Sputnik) – The new Syrian opposition group formed at the Hmeymim air base will meet with UN Special Envoy for Syria Staffan de Mistura and submit proposals on political transition for Syria on March 18, the head of the group told Sputnik on Thursday.

"We have many documents that we are going to submit [to de Mistura] tomorrow. In particular, they are about the governing institutions, and our vision of the settlement, ideas on elections both parliamentarian and presidential. We are going to talk to de Mistura also on how to implement these ideas and create such Syria, with the prime minister and ministers of the government of the national coalition. It should be an inclusive government representing all political forces," Ilian Masaad said.

Asked whether the Hmeymim group was ready to start direct talks with the other parties to the intra-Syrian talks, he replied that it was the reason behind the group's decision to arrive to Geneva.

© Flickr / tripu
Syrian Opposition HNC Adviser Hopes Direct Talks Will Accelerate Settlement
"The main idea that we want to present to de Mistura is the necessity to start implementation of Vienna agreement and establishment of the democratic and secular [governing] institutions, national coalition government, parliamentary and presidential elections. All other topics are technical issues that should be settled by Russia, the United States, Syrian government and the Red Cross," Masaad stressed.

The Hmeymim opposition group's head said he was very much concerned by humanitarian issues in Syria, however, there was still no opportunity to solve them.