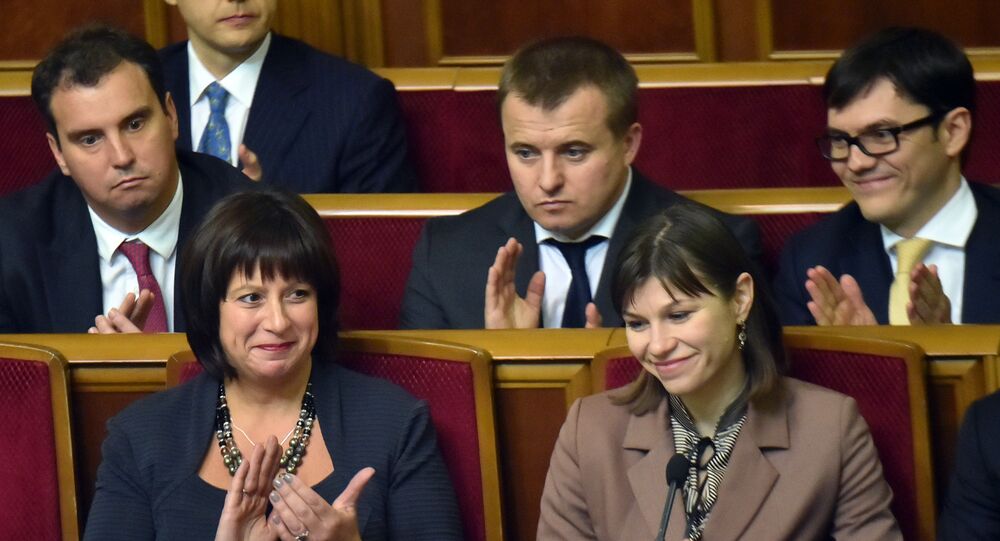 Ukrainian Economic Development Minister Aivaras Abromavicius, one of several high-profile foreign experts brought into the government to assist with reforms, has announced plans to resign. His resignation could signal the start of a process which experts have already likened to Ukrainian officials fleeing a sinking ship.

"Today, I decided to tender my resignation as the Minister of Economic Development and Trade of Ukraine," Abromavicius said in a statement published on the ministry's website. "It has become clear that any kind of systematic reform is decisively blocked. It is more than the mere lack of support or political will. These are concrete actions aiming to paralyze our reform efforts."

"Neither me, nor my team, have any desire to serve as a cover-up for covert corruption, or become puppets for those who, very much like the 'old government', are trying to exercise control over the flow of public funds. I am not willing to travel to Davos and talk about our successes to international investors and partners, all the while knowing that certain individuals are scheming to pursue their own interests behind my back," the minister added.

© Sputnik / Stringer
Wrench in the Works: Diplomats Bemused by Ukrainian Minister’s Resignation
Western ambassadors to Ukraine quickly put together a joint statement voicing their shock and "deep disappointment" over the minister's resignation, demanding that "Ukraine's leaders set aside their parochial differences," put "the vested interests that have hindered the country's progress for decades squarely in the past," and "press forward on vital reforms."

Much of the Western media was also disappointed with the announcement, Bloomberg calling the resignation "a new setback" for a government "splintering over issues from the war in the nation's east to faltering anti-corruption efforts." Abromavicius's departure, the business news agency suggested, "underlines growing dysfunction in Ukraine, where memories of broken reform promises from the 2004 Orange Revolution persist."

Meanwhile, Serhiy Arbuzov, the former vice prime minister from the Ukrainian administration thrown out of office during the Maidan coup d'état in February 2014, suggested that Abromavicius's resignation is evidence that "the members of the 'Maidan' team are fleeing the sinking ship, unwilling to take personal responsibility for collective actions like the collapse of the economy, deteriorating standards of living and arms gang on the streets of Ukrainian cities."

For their part, Ukrainian political analysts stated the obvious: that the economic minister's resignation is an indication that the cracks in the country's increasingly dysfunctional government are turning into a chasm. Some suggested that the minister might end up joining the camp of disgraced former Georgian president and current Odessa governor Mikheil Saakashvili, with others saying that Abromavicius may be attempting to force President Petro Poroshenko's hand in eliminating his own opponents.

One of the Ukrainian government's great champions of reform…and a believer in the future Ukraine's people deserve https://t.co/cwdnsl29OK

​Others still presented a simpler approach: that the minister resigned due to his incompetence.

© AP Photo / Emilio Morenatti
Kiev Authorities Turning Ukraine Into a Full-Fledged European 'Banana Republic'
Speaking to Russian newspaper Svobodnaya Pressa, Denis Denisov, the director of the Ukrainian Branch of the CIS Institute, suggested that in the present situation, "it is becoming obvious to everyone that the people working in [Prime Minister] Arseniy Yatsenyuk's cabinet were not only unable to cope with their tasks, but effectively did everything they could to ensure that the country was plunged into a severe economic crisis, whose consequences will be felt for decades."

"In about two weeks, a report will be submitted to the government on the work done in 2015. It's clear that not a single member of the cabinet, the minister of economy included, has anything to boast about. The country is continuing its plunge into the abyss. All the economic indicators are down, there is no modernization taking place, and no investment in the country. All of this is the responsibility of the ministry of economic development and trade."

The analyst recalled that "when Abromavicius was first appointed, there was a lot of talk about his professional abilities. Prior to his appointment, he worked only in hedge funds – in other words, engaged in speculation, and after that he suddenly received a major government post. Then, as now, it was obvious that he could not deliver. And the fact that he is now trying to write off his failures on [Poroshenko Bloc MP] Ihor Kononenko, or whoever else it may be, is a low move."

"This resignation," Denisov suggests, "is the logical conclusion of the work of the variags* operating in Ukraine. They came in, enriched themselves, and now are trying to escape the sinking ship."

*The variags were pirate Norsemen plundering the coasts of Europe from the 8th to the 10th centuries.

© Sputnik / Nikolay Lazarenko
Ukraine’s Parliamentary Coalition Set to Reformat Cabinet
Ultimately, Denisov said, "in two weeks, after the submission of the report on the cabinet's work in 2015, the entire cabinet may face a 'reformatting', and this is much more important than the resignation of one minister."

For his part, Dmitri Zhuravlev, the general director of the Institute of Regional Problems, told the newspaper that Abromavicius's dismissal is an indication of American and European elites' utter disappointment with the post-Maidan political project.

"An anti-oligarchic revolution did not take place in Ukraine, and will not take place. The gap between objectives and the reality is so large, that it is noticeable even to the 'foreign legionnaires' in the cabinet. This says a great deal. After all, foreigners do not simply come to Ukraine; they are sent there. Who sends them is another story. But it is hard to imagine that Abromavicius sat in Lithuania thinking about how to get a government post in Ukraine. If he came, it means someone invited him. And if he has decided to leave, it means that 'that someone' is extremely dissatisfied with what is happening in the country."

In the final analysis, Zhuravlev suggests, "America's purely political support for Ukraine as an anti-Russian project will continue. But Ukraine as an economic project is looking less and less attractive in the eyes of its Western partners."

Yatsenyuk's Ploy to Blackmail Poroshenko Via Referendum on Constitution