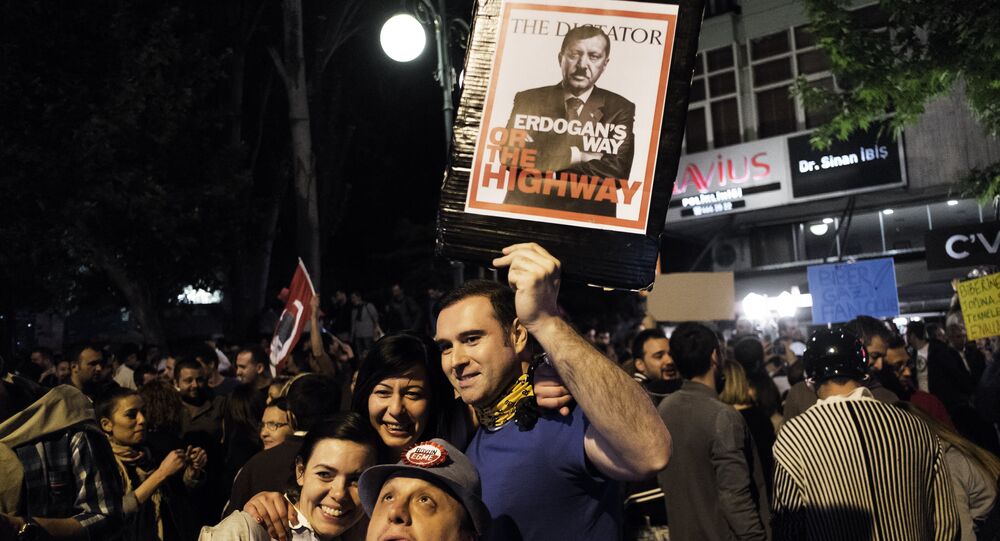 Fascist Faux Pas No Joke: 'US Should Sanction Erdogan' Over Hitler Remark

US political scientist Johan Tures has called for slapping "smart sanctions" on Turkey over President Recep Tayyip Erdogan's recent remarks about the efficiency of the German presidential system under Adolf Hitler.

Tures described Erdogan's remarks as a "rare instance of his honesty," which he said showed "how the strongman really feels." At the same time, Tures said, "in Erdogan's Hitleresque state, it would be a crime to suggest that Erdogan admired Hitler."

"Ironically, you could even be marched off to prison, for suggesting that Erdogan is authoritarian," Tures said in his article published by the US news website Huffington Post.

Has anyone noticed how much Erdogan looks like Hitler? Creepy indeed. Also Erdogan contains the word Dragon.

He recalled that a lot of people, among them journalists and law enforcement officials, were put behind bars after they accused Erdogan of authoritarianism. Even those living in the US who criticized Erdogan were targeted, Tures said, adding that Erdogan justifies his actions by claiming that his enemies are "terrorists."

Put a moustache on Erdogan And he looks like hitler

Tures also pointed to the swift and sarcastic reaction of Turkey's social media, which remains "one of the few unregulated sources of news in Erdogan's government" and which immediately started to draw parallels between Erdogan and Hitler.

#Erdogan aiming to be the living and breathing #Hitler of our time He even aspires to be him #Fact pic.twitter.com/NVMfW8xriH

Tures added that despite Erdogan's ruling AKP party's victory in the November elections, AKP failed to obtain "the votes to give their leader the Hitleresque powers that he wants." To that end, Erdogan wants a referendum in order to get those powers, "which would likely ensure that Erdogan and his family will rule this NATO ally of the USA indefinitely, in a most undemocratic manner," according to Tures.

In this regard, Tures hinted that the United States should consider an array of actions in relation to Turkey, such as breaking diplomatic ties with the Erdogan regime, giving a a helping hand to Turkey's civil society, reducing US military aid to the Turkish government and considering "smart sanctions" against Erdogan and his family.

"Erdogan's admission of admiration for Hitler demonstrates that doing nothing will not help the problem, any more than it did in the 1930s," Tures concluded.

His presidency is also backed with the support of the country's parliament, which is controlled by Erdogan's Justice and Development Party, which gained a majority during snap elections on November 1, 2015.