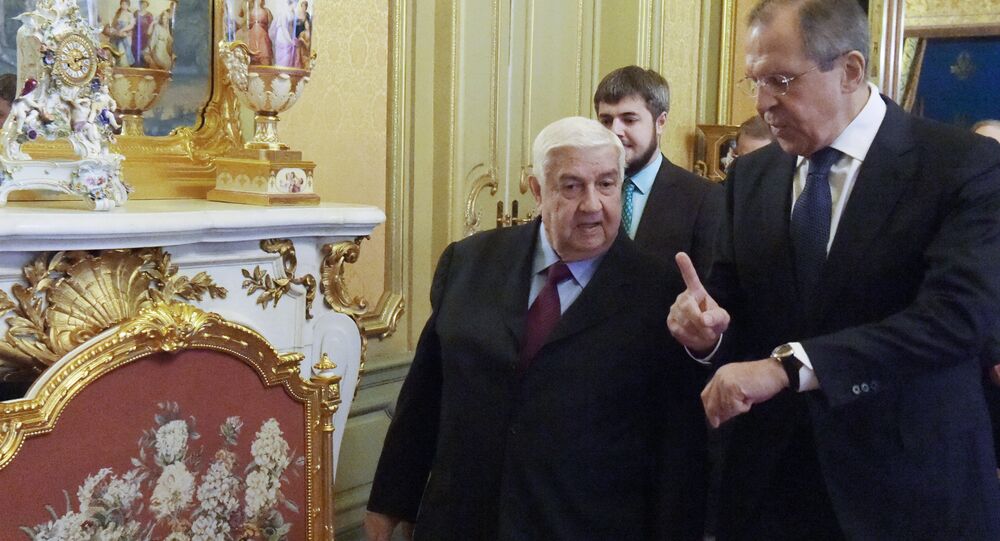 Russian Foreign Minister Sergei Lavrov and his Syrian counterpart Walid Muallem commented on the downing of a Russian Su-24 bomber by the Turkish Air Force on Tuesday, as well as anti-terror efforts during a joint press conference after their meeting in Moscow.

Sergei Lavrov said that it is unacceptable to declare commitment to the anti-terror fight, but play "double games" at the same time.

"We consider the situation in which some of these countries [neighboring Syria] state their adherence to corresponding UN Security Council resolutions, declare themselves members of anti-terrorist coalitions, but in reality play a double game, where terrorists practically play the part of unspoken allies."

According to the Russian top diplomat, Russia and Syria both start to question Turkey's commitment to anti-terror fight.

Both Moscow and Damascus believe that only Syrians must decide their future without outside interference.

Moscow is ready to take into account interests of countries that are truly interested in combating terrorism, Lavrov said.

"Turkey decided to down a Russian bomber because it continues to patronize the terrorists. The other reason is the fact that in five days Russian airstrikes destroyed over 1,000 tank trucks carrying stolen oil from Syria to Turkey."

© Sputnik / Maksim Blinov
Lest You Forget: Lavrov Reminds Turkey of Its Involvement in ISIL Oil Trade
According to the Syrian minister, "Turkey continues to maintain export and transportation of oil stolen in Iraq and Syria by ISIL militants. Then, the oil is transported to ports abroad."

Muallem called the Turkish attack on the Su-24 aircraft an "act of aggression" that challenges Syria's sovereignty.

"This act of aggression is a challenge to the sovereignty of Syria as the plane was shot down in Syrian airspace, and Turkey has failed to provide any clear evidence regarding this incident."

Meanwhile, Lavrov said that it was not a coincidence that Turkey started to worry after Russia had started to bomb ISIL convoys of fuel tankers with illegal oil.

"They [Turkish authorities] carefully protect any information about their smuggling deals. It can be proved with the fact that recently two Turkish journalists were arrested for reporting about illegal arms supply to ISIL from Turkey."

"I have no evidence, but there are rumors that Turkish agents, including Erdogan’s son, are involved in selling stolen oil. If I were [US State Secretary John] Kerry, I would make efforts to shed the light on this information."