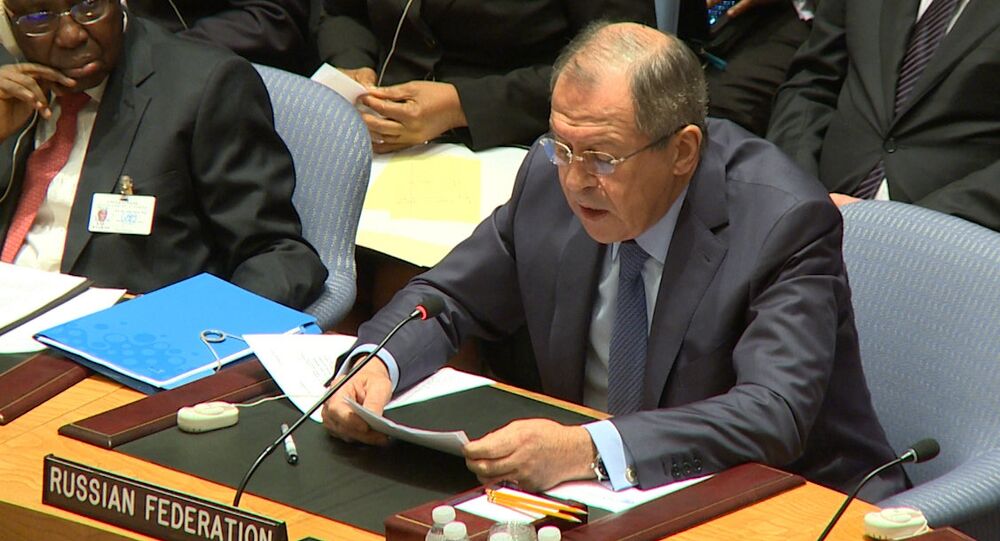 On Wednesday, Russia's Foreign Minister Sergei Lavrov will chair a UN Security Council meeting on terrorism, at which he will present Russia's proposal for an international plan of action to tackle the threat of terrorism in the Middle East and North Africa.

© Sputnik / Aleksey Nikolskyi
Stakes in Syria Too High for US to Avoid Working With Russia
Russian Foreign Minister Sergey Lavrov will head a UN Security Council meeting on Wednesday at which he will lead a discussion on the creation of a consensus-driven plan of action to address the fight in the Middle East, and counter the threat of terrorism.

Russia currently holds the rotating presidency of the Security Council, and is seeking to make use of the opportunity to gain a consensus on fighting militant religious extremists.

"We propose discussing the creation of an agreement on a resolution for coordinated action from all powers which are opposed to the 'Islamic State' and other terrorist groups," Russian President Vladimir Putin said in his address to the UN General Assembly on Monday.

However, Russia's representative at the UN Security Council, Vitaliy Churkin, said that Russia's effort to get all of the members of the Security Council to agree to draw up a comprehensive document which would lay out a strategic approach to the conflict has met with opposition from the US.

"The Americans said that it is necessary to sort out what's going on in Syria before we make any documents," said Churkin. As a permanent member of the Security Council, the US has the power to block a resolution, which requires the agreement of all permanent members in order to be passed.

"They said they are not politically ready at the moment to accept a collective document with us," explained Churkin.

© Sputnik / Alexey Filippov
Russia, Iran, US, Saudi Arabia, Turkey, Egypt Could Hold Group Talks on Syria in October
In his efforts to create an international coalition which would agree on collective action against the Islamic State and other terror groups operating in the Middle East and Africa, Lavrov will also hold talks with US Secretary of State John Kerry, their third meeting in recent days on the sidelines of the UN Security Council General Assembly, and with his Syrian counterpart Valid Muallem.

The talks are being held to prepare the ground for an international contact group, slated for October, at which Russia, Iran, the US, Saudi Arabia, Turkey and Egypt will discuss the means of resolving Syria's crisis.