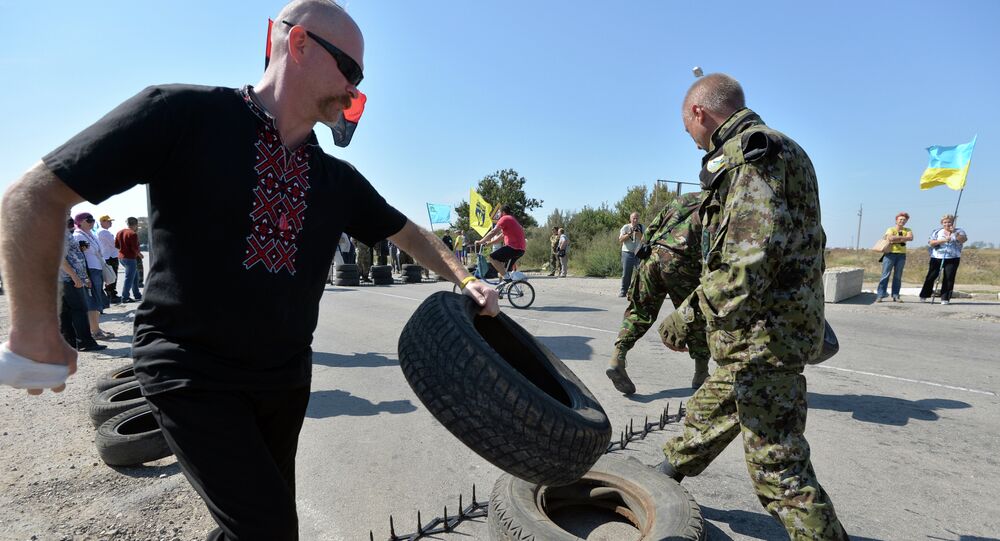 The Right Sector/'Tatar activist'-organized food blockade of Crimea is off to a rocky start, with a split appearing to emerge over the initiative among both domestic and foreign supporters of post-Maidan Ukraine. From governors and journalists to experts and social commentators, many are beginning to challenge the blockade's logic and rationale.

© REUTERS / Sergii Kharchenko
Kiev Hopes to Win Crimeans' Hearts and Minds…by Cutting Off Their Food Supplies
Fugitive former Georgian president and current Odessa Governor Mikheil Saakashvili criticized the blockade for its 'unofficial' nature, telling Ukraine's Espreso TV that it should have been organized by authorities in Kiev, not by armed social activists. "Such things should be carried out by official government entities, not by armed elements of the population," he noted.

The governor warned that these "unofficial groups" could go on to demand power, confident that having "crossed the line," they may come to think of themselves as arbiters of state power. "The state must not give up to anyone its monopoly on the use of force," he emphasized.

Others criticized the logic and timing of the blockade, which was announced last week by Poroshenko Bloc MPs Refat Chubarov and Mustafa Dzhemilev, who also serve as leading figures in the Mejlis of the Crimean Tatar People, a group claiming to represent the peninsula's Tatar community.

Vehement Russia critic Adrian Karatnycky, Senior Fellow at the Atlantic Council and former president of US government-affiliated NGO Freedom House, sarcastically commented that with a "serious ceasefire in the Donbas…let's start heating things up in the Crimea. Let's enrage Putin; that way we can help the peace process. Timing and sequencing is everything in the tactics of war and political struggle. Opening up a two front struggle now is –with all my respect for the Crimean Tatars –frankly insane."

There's a serious ceasefire in the Donbas. So. let's start heating things up in the Crimea. Let's enrage Putin that way…

Shaun Walker, The Guardian's Moscow correspondent, tweeted that he personally "really [doesn't] get the logic of this Crimean Tatar / Pravy Sektor blockade of Crimea at all…"

Maybe I'm missing something, but I really don't get the logic of this Crimean Tatar / Pravy Sektor blockade of Crimea at all…

Meanwhile, in an opinion piece published by the US-funded broadcaster Radio Free Europe's Crimean Service, columnist Ivan Serhiyenko offered a detailed criticism of the blockade, saying that it will not help the cause of the Tatar activists' human rights (ostensibly the reason for the blockade in the first place), adding that the obstruction is not only unlawful, but that it won't cause any major economic damage to Crimea's economy. He complained that Kiev does not have a coherent strategy on returning Crimea, or even the Donbass region, to Ukraine. He lamented that ultimately, the blockade is "doomed to failure."

English-language social media jumped in to poke holes in the initiative, one user asking "how exactly is the blockade supposed to make more [Crimeans] desire to be 'un-annexed'?"

@vorobyov Do the residents of Crimea agree? How exactly is the blockade supposed to make more of them desire to be "un-annexed"?

Others challenged the timing, even if they supported the spirit of the initiative:

Crimea Blockade's by the Tatars is brilliant, but why now? Why has Ukraine done trade with them for so long. #crimeablockade #crimea

Their commentary echoes that of Crimean officials themselves, with First Vice-Premier Mikhail Sheremet suggesting that if Kiev actually sought to harm Crimea's economy, "such a provocation should have been done a year ago. Today, we are not dependent on the Ukrainian market."

Others challenged the media narrative being spun in Ukraine, citing not only the blockade's foolishness, but emphasizing that this is not an "initiative of the Tatar community," but rather of "self-proclaimed radical religious leaders of Mejlis who pretend to represent [the] majority."

Meanwhile, Crimean authorities continued to voice their bewilderment at the rationale behind the decision; Prime Minister Sergei Aksyonov calculated that Russian and Crimean-made products already constitute 95 percent of the peninsula's consumption, and told Russian television that the blockade will only serve to completely eliminate Ukrainian food supplies from the Crimean market.

"This approach will result in Ukrainian goods being pushed out of Crimea's market completely within the course of two weeks. This action seems to be directed primarily against the citizens of Ukraine, who live in the regions of Kherson and Mykolaiv. Crimea will calmly live through it," Aksyonov told news channel Russia 24.

In their initial response, Crimean officials took the blockade almost as a half-hearted joke, Aksyonov suggesting that it reminded him of a scene from an old Soviet cartoon, while Vice-Premier Sheremet called it a "political farce" demonstrating its organizers' true attitudes toward the Crimean people.

© Sputnik / Vladimir Sergeyev
Blockade of Crimea by Ukrainian Lawmakers Harms Crimean Tatars - Diaspora
Nonetheless, most Ukrainian media are continuing to present the blockade as a just and righteous cause, Ukraine Today commenting that the initiative, expected to cost Ukrainian farmers and businessmen hundreds of millions of dollars in losses, is a struggle against Crimean Tatars' persecution. The network explained that the initiative, factually organized on the ground by the Right Sector paramilitary group and other right-wing militants, is actually an expression of the will of the Crimean Tatar people, "angry about discrimination and hardship imposed by the self-styled Kremlin-appointed authorities," leading them to decide to blockade "their own homeland."

Other Ukrainian media, aimed at the domestic market, could not help but express their joy over the blockade. Compiling the reactions of Kiev-based politicians, experts and social organizations, news portal Obosrevatel quoted 'political scientist' Alexei Golobutskiy, who suggested that "the blockade of Crimea is a very good thing. Let them eat tourists from Russia."

The Ukrainian media's allegations about Russian authorities' "human rights abuses" against the Crimean Tatar minority are not difficult to refute, with statistics showing the reality on the ground. Out of the 260,000 Crimean Tatars living on the peninsula, only 500 have refused to exchange their Ukrainian passports for Russian ones. Moreover, among the 600-800 Tatars who left Crimea for mainland Ukraine as a sign of protest in the aftermath of the March 2014 referendum, which saw the peninsula's return to Russia, over half have already returned to the peninsula, most even receiving state assistance in getting Russian citizenship and finding employment.

© Sputnik / Andrey Iglov
Poroshenko's Proposal to Make Crimea a Tatar Autonomy: Too Little, Too Late
Local and federal authorities emphasized immediately following Crimea's reunification with Russia that Crimean Tatars' rights would be provided for, with the Tatar language adjudicated as an official state language on the peninsula, the minority receiving guarantees to government representation, as well as a number of preferences aimed at preserving and respecting their rights, including making Muslim holidays state holidays and providing subsidies for pilgrimages to Mecca. In 2014, President Putin signed a decree aimed at ensuring the minority's rehabilitation, meant to right the wrongs committed against the Crimean Tatar community under Joseph Stalin, who deported the minority en masse to Central Asia during the Second World War.

With even long-time supporters of authorities in post-Maidan Ukraine beginning to ask tough questions about the rationale behind the blockade, while Kiev continues to remain silent on the issue, logic seems to dictate that it will only be a matter of time before the blockade comes to an end. Otherwise, Ukraine's already battered economy stands to lose another half-a-billion dollars' worth in trade over a cause which Crimean Tatars inside Crimea itself have said is only meant to inflate their Kiev-based 'representatives' egos.

Poroshenko's Proposal to Make Crimea a Tatar Autonomy: Too Little, Too Late