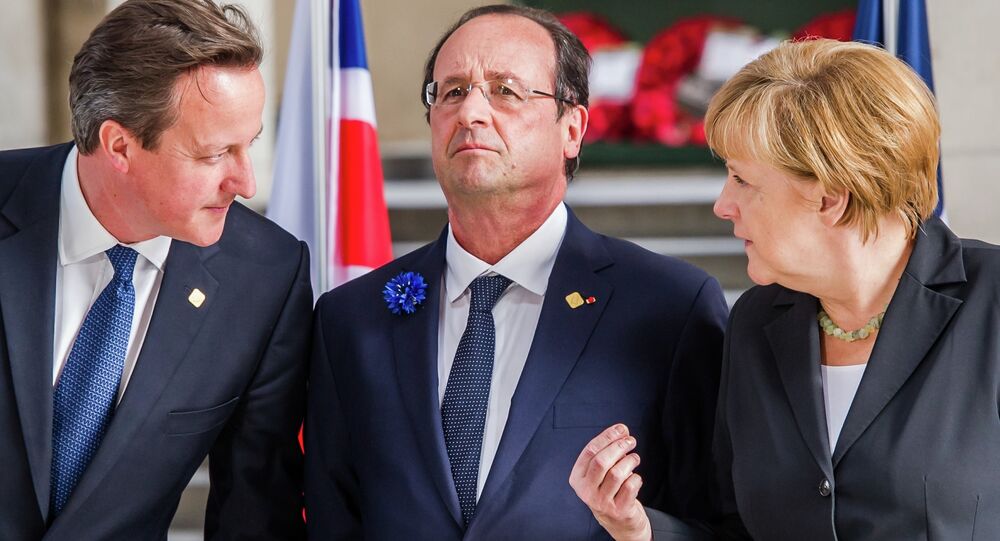 A proposal by French President Francois Hollande to create a Eurozone government is "absolutely utopian," as Germany will not want to put its economic stability and leadership in the European Union at stake, former French Minister of Transport and current member of the French National Assembly Thierry Mariani told Sputnik Tuesday.

MOSCOW (Sputnik), Svetlana Alexandrova — On Sunday, Hollande proposed a Eurozone government with a specific budget and a parliament to ensure democratic control. The French president called on citizens to renew their faith in a European project weakened by the Greek crisis.

"At this moment it is an absolutely utopian idea to think that the strongest European state like Germany will decide to share the risks, which would be the case with a Eurozone budget, and to put its economic power and control at stake."

The French lawmaker added that Germany, "does not plan for these changes (Eurozone parliament and government to ensure their democratic control) as it rules alone and want to make decisions on its own."

Mariani claimed that Hollande's plan would be almost impossible to perform, as it would require the reform of all European agreements, requiring a referendum.

"It is a very dangerous time to ask the Europeans what they think about Europe," Mariani stated, adding that no country would accept to pay extra for a proposed eurozone government and parliament.

Hollande's proposal came after the Eurozone leaders reached an agreement with Greece on a third bailout package for the country on July 13.

Eurozone members are currently united in the Eurogroup, an informal body comprising the finance ministers of each country, presided over by Dutch Finance Minister Jeroen Dijsselbloem.