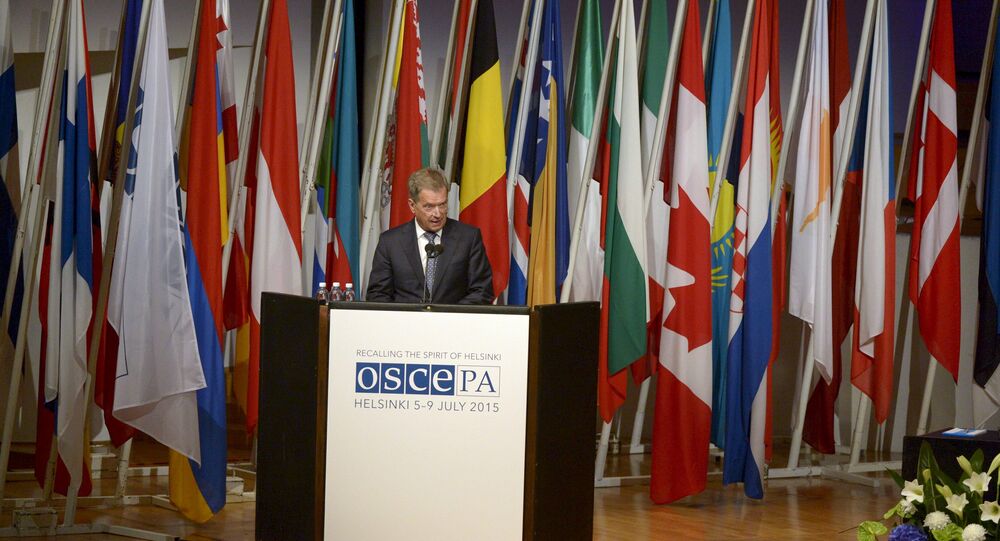 The situation in Ukraine, the Greek debt crisis and the issue of migrants and refugees in the Mediterranean region dominated the agenda of the Parliamentary Assembly (PA) of the Organization for Security and Co-Operation in Europe (OSCE) in Helsinki, Finland.

HELSINKI (Sputnik), Svetlana Alexandrova — On Tuesday, General Committee on Political Affairs and Security continued debates on the draft resolution, introduced by Ukraine and Canada, that condemns Russia’s alleged violations of Ukraine’s sovereignty and territorial integrity since early 2014. Moscow has denied these claims.

Delegates from more than 30 countries took the floor to either support or condemn the proposed resolution.

Some lawmakers stressed that in the absence of the Russian delegation, an adoption of such a resolution will undermine the OSCE PA principals of open dialogue and lead to further deterioration of ties between Russia and the western counties.

He added the "awkward thing" about the anti-Russia document under discussion at the OSCE PA is that it was initiated from outside Europe and did not have Europe's best interest at heart.

Artashes Geghamyan of Armenia, pointed out that "adopting of the resolution will reverse some titanic and hard-won efforts to resolve the situation in the East of Ukraine made by the Normandy group" which comprises leaders of Germany, Russia, Ukraine and France.

The delegates from Canada, Ukraine and the United States were among states that called for a support of the resolution.

© Sputnik / Andrei Stenin
Above the Law: Right Sector Says It Does Not Obey Armed Forces' Orders - OSCE
"I strongly support the Canadian and Ukrainian resolution," US delegation’s head Roger Wicker said Monday. "At the same time, I want to point out that the resolution of condemnation of Russian aggression is directed to the government leaders of Russia and is not critical of Russian people and we wish for it to be seen as a hopeful sign by the Russian people," he added.

Kiev accuses Moscow of violating every one of the ten principles of the Helsinki Accords since February 2014 by allegedly ignoring Ukraine’s right to sovereignty and territorial integrity.

On Sunday, Nikolay Kovalev of Russia called for the assembly not to breach the PA protocol by reviewing the draft resolution for the second time after it was approved during the previous OSCE PA session in 2014 in the Azerbaijan’s capital of Baku.

However, later on Monday the Parliamentary Assembly decided to review it after failing to obtain required two thirds of votes. The only Russian delegate called it "a gross violation of the procedure."

An OSCE Parliamentary Assembly meeting in Helsinki is taking place on July 5-9. The Russian delegation is not participating because its members were denied visas by the Finnish authorities.

Austerity Unable to Save Greece

© REUTERS / Alkis Konstantinidis
Greek Proposals to Lenders Include EU Investments, Debt Restructuring
The Greek economic crisis was discussed at the Committee on Economic Affairs, Science, Technology and Environment meeting. Italian parliamentarian Marietta Tidei noted that austerity measures are not proving to be adequate to solve the problems of many countries, including Greece.

"What is happening in Greece is the most striking evidence of this… the crisis has hit the poorest in society," Tidei said.

Therefore, fiscal consolidation cannot disregard a strategy of growth, social cohesion and investments in science and technology, which are vital to improving the living conditions of people, she concluded.

On Sunday, more than 61 percent of Greek voters rejected in a referendum the austerity measures proposed by Athens' major international creditors, which has renewed fears of Greece defaulting on outstanding debt and exiting the eurozone.

On Tuesday, eurozone finance ministers convened in Brussels for a Eurogroup meeting to find solutions to settle the ongoing financial and social crisis in Greece.

Greece's overall debt stands at about $350 billion, of which $270 billion is owed to the European Central Bank, the International Monetary Fund and several eurozone countries.

Whom to Blame for Migrant Crisis in Mediterranean?

© AP Photo / Gregorio Borgia
EU Should Aid Africa Rather Than Try to Curb Migration - Italian Lawmaker
On Tuesday, Committee on Democracy, Human Right and Humanitarian Questions adopted a resolution sponsored by parliamentarian Marietta Tidei of France "calling for Urgent solution of the deaths in the Mediterranean."

Tidei welcomed the new European Union Council ten-point action plan on migration that includes establishing a stronger presence at the sea in order to tackle the flow of illegal migrants by reinforcing the Triton and Poseidon operation.

© AFP 2020 / BULENT KILIC
US, NATO Actions Fueled European Migrant Crisis - French Senator
She urged all EU member-states to participate in migrant reception quota plan so that "migrants may receive asylum application according to set quotas and resettlement procedures and ensure the migrants can travel safely."

Yves Pozzo di Borgo, a senator and member of the French delegation at the OSCE Parliamentary Assembly session in Helsinki, in his turn, pointed out the link between conflicts in the Middle East and the unprecedented increase in number of migrants attempting to reach European shores. He said that the United States' war with Iraq and the French-led NATO operation in Libya have helped fuel the migrant crisis currently engulfing Europe.

The UN Refugee Agency documented 137,000 refugees crossing the Mediterranean Sea into Europe in the first six months of 2015, compared to 75,000 during the same period last year.

On Monday, the OSCE Parliamentary Assembly’s International Secretariat has released the final report of its Helsinki +40 Project that presented concrete proposals for reforming the OSCE to ensure its principals and efficiency in the years ahead.

The report was presented during a special event to commemorate the 40th anniversary of the OSCE’s founding document, the Helsinki Final Act.

OSCE PA President and Finnish parliamentarian Ilkka Kanerva, who presented the report, stated that "the only fitting way to commemorate the Final Act is to strive with new urgency toward realizing its vision of respectful interstate relations and adherence to commitments and that requires reforming the way we work."

The Final Report stresses need to better address human rights and human dimension issues and to Intensify efforts in arms control, including through the agreement of a new code of conduct for OSCE participating States in the most problematic areas.