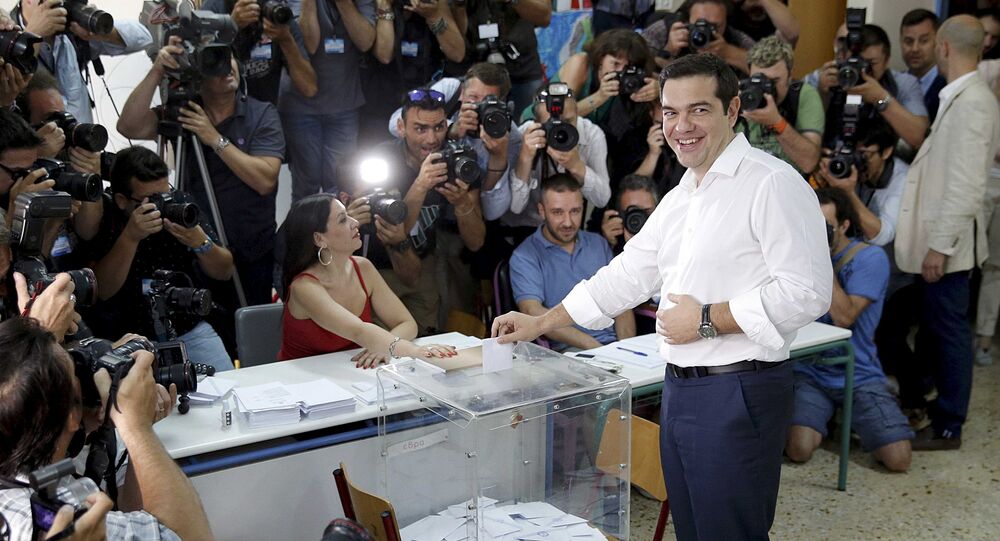 Greek Prime Minister Alexis Tsipras voted in an austerity referendum Sunday, in which Greek people are set to decide whether to accept the international creditors’ demands for additional austerity measures.

“It is a holiday today, because the democracy is a celebration and happiness. Democracy defeats fear and blackmail, and then liberation comes,” Tsipras told the crowd.

“I am very optimistic,” he added.

Tsipras proposed to hold a referendum on Greek bailout in June, after the country’s negotiations with international creditors came to a standstill.

Today we're supporting #democracy–for a better future for all of us, in #Greece and Europe. http://t.co/4YHWbWeq6h pic.twitter.com/iYZrXQZWax

Tsipras has urged the voters to say a "proud no" to the EU ultimatums, arguing that the option would strengthen the country's negotiating position.

Greek national debt stands at about $350 billion, of which $270 billion is owed to the European Central Bank (ECB), the International Monetary Fund (IMF) and some Eurozone countries.

© REUTERS / Yannis Behrakis
Brussels Could Provide Athens With Emergency Loans - EU Parliament Head
Following Athens’ failure to repay a small fraction of its debt to the IMF earlier in July, the country practically defaulted on the institution, triggering further speculation that it might leave the Eurozone.

Media suggested that if Greek people vote “Yes” in a Sunday referendum, Tsipras would most likely have to step down. Greek Finance Minister Yanis Varoufakis has already pledged to resign if this scenario unfolds.

In case Greece votes “No,” it would be interpreted as a step toward the exit from the Eurozone, according to Eurogroup President Jeroen Dijsselbloem.