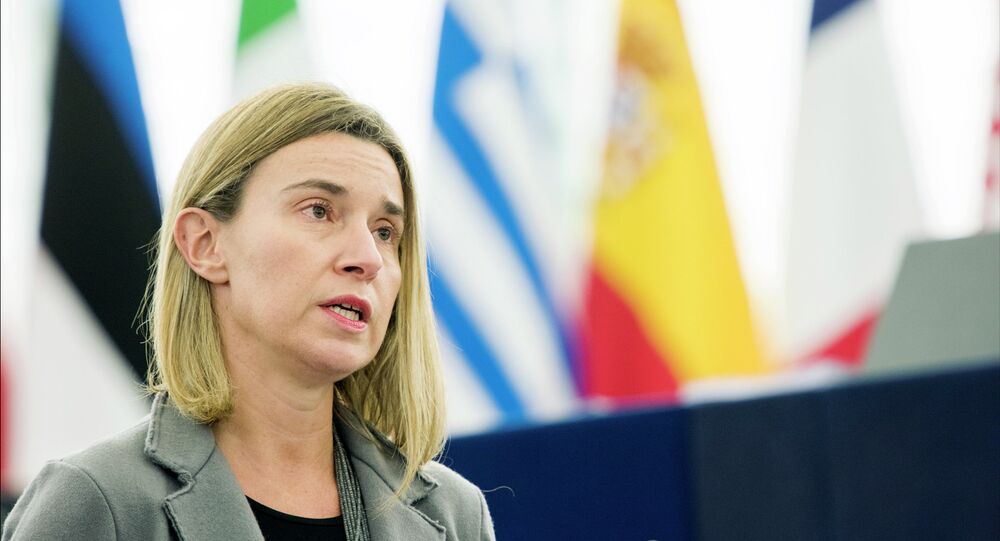 According to the EU top diplomat, the next two weeks will be decisive in the process of reaching a decision on Iran's nuclear program.

PARIS (Sputnik) — Reaching an agreement on the Iranian nuclear program is essential not only for security in the Middle East, but also for security worldwide, EU foreign policy chief Federica Mogherini said Saturday.

© AFP 2020 / ERIC PIERMONT
French FM Notes Progress on Iran Nuclear Program Despite Disagreements
Mogherini told journalists that the next two weeks would be decisive in the process of reaching the deal on Iran's nuclear program. She added that these days would show whether it was possible to come to an agreement that was important for security worldwide and not only in the Middle East.

Only the agreement that does not allow creating nuclear weaponry under the framework of Iranian nuclear program will be acceptable, the EU foreign policy chief stressed.

Mogherini pledged to exert her best efforts to facilitate the process of negotiations.

© AP Photo / Ahmed Saad, Pool
Iran May Agree to Limit Nuclear Program After New Round of P5+1 Talks
The P5+1 group of international mediators, comprised of Russia, Germany, the United States, the United Kingdom, China and France has been negotiating a comprehensive nuclear deal with Iran since November, 2013. The agreement is expected to ensure the peaceful nature of Iran's nuclear program in exchange for the lifting of sanctions.

The deadline for reaching the agreement was set for July, 2015.

On March 5, Iran and P5+1 had their most recent talks in the Swiss resort of Montreux. According to the EU External Action Service, the Montreux negotiations resulted in “some progress.”