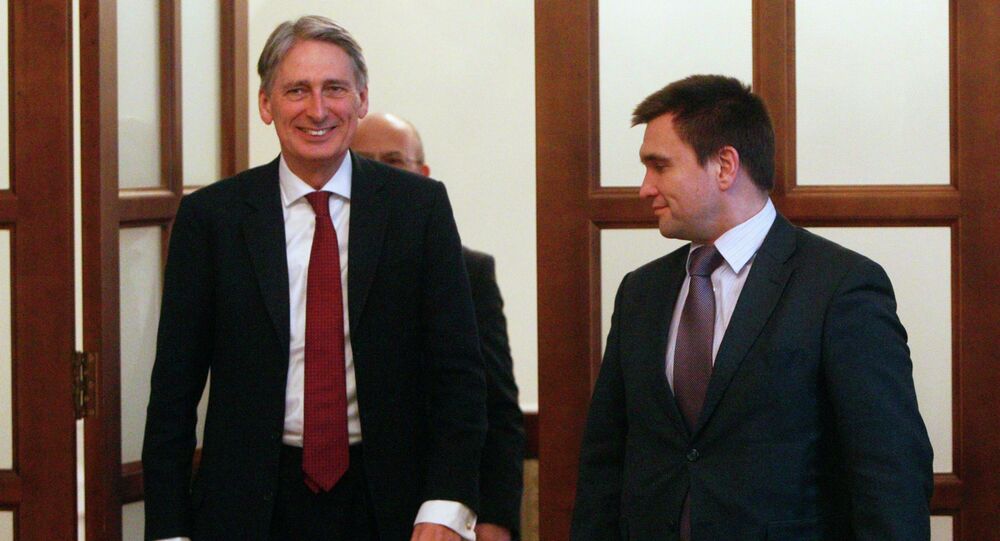 EU to Lift Anti-Russia Sanctions Only After Minsk Accords Fulfilment

UK Foreign Secretary Philip Hammond stated during his visit to Ukraine that the European Union must stay firm on sanctions against Russia until Russia complies Minsk agreements.

On Thursday, Hammond arrived in Kiev for an official visit. Aside from Klimkin, the British Foreign Secretary is scheduled to meet with Ukrainian President Petro Poroshenko and Prime Minister Arseniy Yatsenyuk

On Tuesday, spokesman for the Ukrainian Foreign Ministry Yevhen Perebiynis, said that during Hammond's visit to Kiev the sides will discuss bilateral relations and the current situation in eastern Ukraine.

© Fotobank.ru/Getty Images / Peter Macdiarmid
Ukraine Conflict to Dominate UK Foreign Minister's Visit to Estonia
Since Kiev launched its military operation in southeastern Ukraine in April, 2014, Ukraine and the European Union have repeatedly accused Russia of meddling in Ukraine's internal affairs and aiding the independence supporters in Donbas. The European Union, the United States and several other countries imposed sanctions on Moscow amid the accusations.

At the Normandy Format talks between the leaders of Ukraine, Russia, France and Germany on February 12, the sides came up with a set of measures to facilitate Ukrainian reconciliation. A number of European countries said that the implementation of the new Minsk agreement will be crucial in defining the sanctions policy toward Russia.