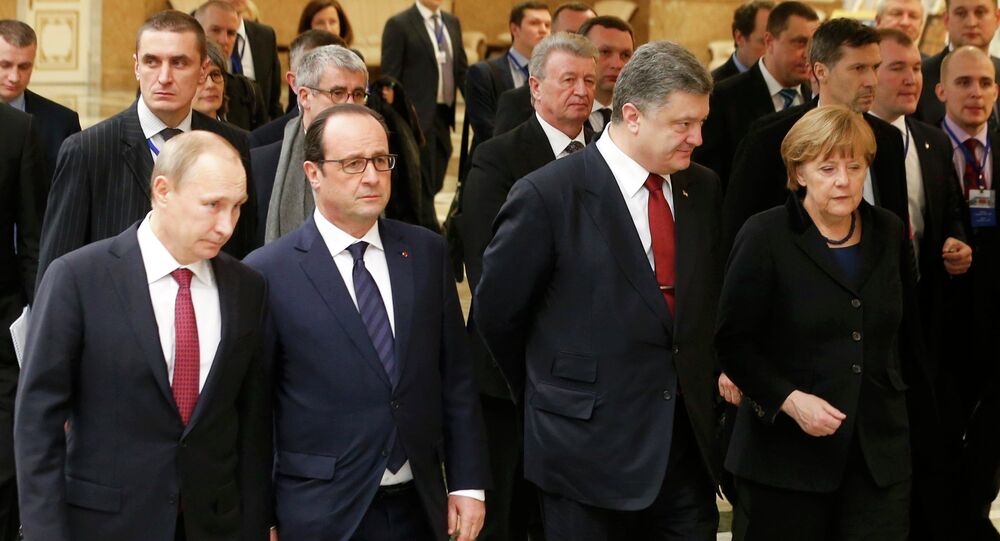 Participants of the Normandy format meeting - Russian President Vladimir Putin, Ukrainian President Petro Poroshenko, French President Francois Hollande and German Chancellor Angela Merkel – have been in talks for more than 13 hours in the Belarusian capital Minsk to hammer out a deal on the Ukrainian crisis.

MINSK (Sputnik) – No documents on Ukraine crisis settlement have been signed during Minsk talks yet, OSCE representative Heidi Tagliavini said.

“So far there’s been nothing,” Tagliavini said.

According to a RIA Novosti correspondent, Russian President Vladimir Putin and French President Hollande left the venue of the Normandy meeting in Minsk.

Ukrainian President Petro Poroshenko dodged a question posed by RIA Novosti news agency in Minsk on Thursday on whether Kiev will sign the reconciliation agreement on the Ukrainian crisis.

Representative of the the Organization of Security and Co-operation of Europe (OSCE) in the Contact Group on Ukraine crisis Heidi Tagliavini has joined the Normandy group talks. OSCE representative earlier left the venue where a Contact Group meeting was being held with representatives from Russia, Ukraine, and Ukrainian self-proclaimed southeastern republics of Donetsk and Luhansk.

The Contact Group has not agreed or signed a document proposed by the Normandy Group on Ukraine reconciliation yet, a source familiar with the negotiations process told RIA Novosti on Thusday.

“The Contact Group has not yet agreed or signed the document,” the source said.

Ukrainian President Petro Poroshenko said that so far there is “no good news” coming from the reconciliation talks on the Ukrainian crisis in Minsk, but there is some hope, Agence France-Presse reported Thursday.

“Unfortunately there isn’t any good news. So far no news, but there is hope,” Poroshenko said, citing several “unacceptable conditions” set forth from the Russian side.

#minsktalks still seem to be going on. As expectated, border control one Of most difficult Issues. Hope they get it right this time

Ukrainian reconciliation talks in Minsk of the 'Normandy four' will continue, as well as other negotiation formats to end the crisis in the country, Ukrainian Foreign Minister Pavlo Klimkin told RIA Novosti on Thursday.

“We will continue to work, we have been working non-stop in all the possible formats,” Klimkin said, responding to a question of whether the Normandy meeting had ended.

According to media reports, a document accepted by the leaders of Russia, Germany, France and Ukraine will attempt to reach a ceasefire agreement starting from February 14. The document also proposes to pull back heavy artillery and create a security zone.

It is unclear if this document is the finalized edition of the agreement that Russian President Vladimir Putin, Ukrainian President Petro Poroshenko, French President Francois Hollande, and German Chancellor Angela Merkel signed.

The talks are over. All the four leaders left the room. #Minsk #minsktalks

Poroshenko entered the hall, then left it and began speaking with someone over the telephone near the doors.

Latest from Minsk: everyone is back in the conference room, the talks are ongoing.

© AP Photo / Mykola Lazarenko/Pool
(VIDEO) Ukraine Reconciliation Deal Handed Over to Contact Group for Review
Earlier it was reported that Hollande and Merkel plan to hold a brief bilateral meeting to express their opinions after the meeting.

The leaders of Russia, France, Germany and Ukraine have handed over a reconciliation agreement to the Contact Group to review, a source in Minsk said.

"The document has been passed to the Contact Group for review and signatures," the source told RIA Novosti.

Participants of the Normandy format meeting — Russian President Vladimir Putin, Ukrainian President Petro Poroshenko, French President Francois Hollande and German Chancellor Angela Merkel – have been in talks for more than 13 hours in the Belarusian capital Minsk to hammer out a deal on the Ukrainian crisis.

Members of the Contact Group, comprising envoys from Kiev, Moscow, the Luhansk and Donetsk people’s republics, as well as the Organization for Security and Co-operation in Europe (OSCE) have also been holding talks in Minsk since Tuesday.

Talks on Ukrainian Crisis in Minsk Push on Into Morning (VIDEO)