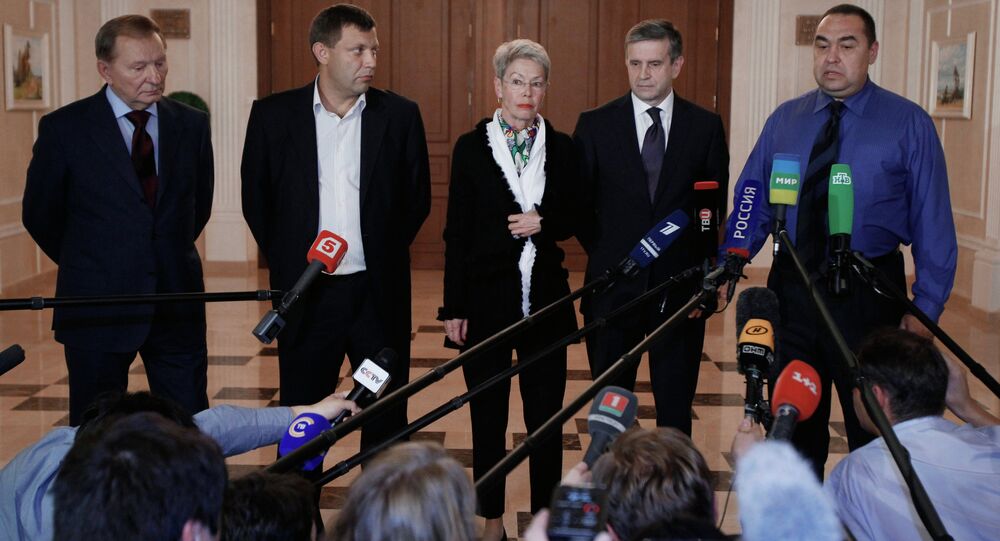 Kremlin spokesman Dmitry Peskov has reported that preliminary negotiations between Kiev and Donetsk and Luhansk self-proclaimed people's republics ahead of the planned Minsk Contact Group meeting.

According to Peskov, the talks were organized as "in the context of offensive action of the Ukrainian side, DPR and LPR [Donetsk and Luhansk self-proclaimed people's republics] representatives have expressed extreme skepticism regarding the prospects of the Minsk [peace] process".

The Kremlin spokesman added that Moscow regrets that representatives of the Ukrainian military and an advisor to Ukrainian President Petro Poroshenko, who were supposed to take part in the Donetsk meeting, "changed their mind at the last moment" and did not arrive for the talks.

However, according to Peskov, Moscow still hopes that the upcoming Minsk meeting will be more successful and will facilitate the discussion of a number of ceasefire-related issues touched upon in Donetsk.

Ahead of Berlin talks on #Ukraine today: Minsk agreements in their entirety is A MUST, before #EU policy on #Russia may change

"The appointment of an official representative for the Minsk talks by Kiev would largely contribute to the achievement of these goals," the spokesman stressed.

The Minsk format talks on Ukrainian reconciliation have been held several times in the Belarusian capital by representatives from Kiev, the self-proclaimed people's republics of Donetsk and Luhansk, Russia and the Organization for Security and Co-operation in Europe (OSCE).

Two Contact Group Meetings, held in September last year, resulted in a ceasefire agreement between DPR, LPR and Kiev and a memorandum specifying the ceasefire and stipulating an all-for-all prisoner exchange and the withdrawal of heavy weaponry along the agreed line of contact between the conflicting sides in Donbas.

A Contact Group meeting was planned to be held in Minsk on January 16, but Kiev representatives failed to arrive at the talks.

In violation of the Minsk accord Kiev unleashed a war again. It’s time for talks between Ukranians themselves. Russia is ready to help.

The military conflict in southeastern Ukraine started last spring when Kiev launched a military operation against local residents who refused to recognize the new Ukrainian government, which came to power as a result of a coup. Fighting continues in the region despite the Minsk truce.