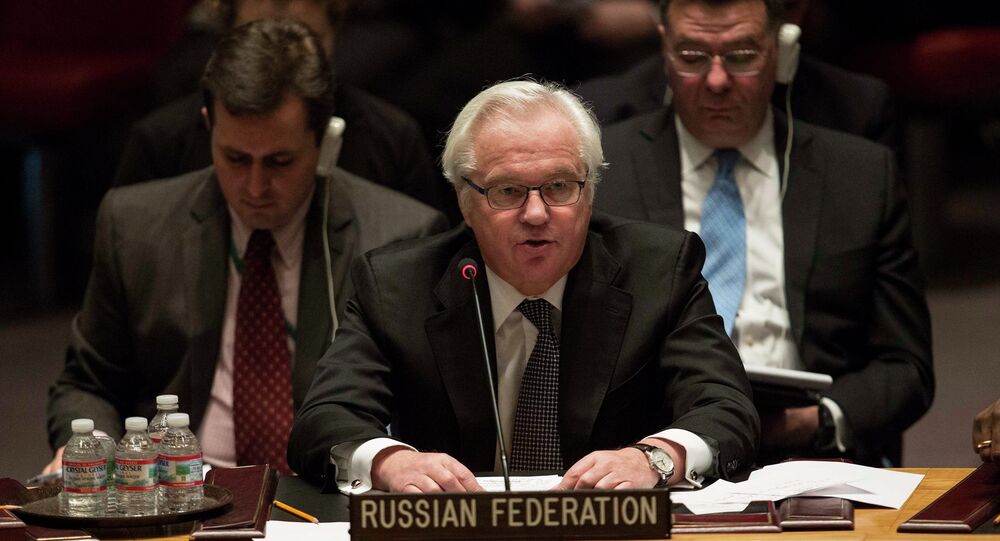 Russia abstained during the vote at the UN Security Council on extending the mandate of the International Criminal Tribunal for the Former Yugoslavia, as it did not act in line with the Security Council Resolution 1966 of 2010.

UNITED NATIONS, December 19 (Sputnik) — Russia abstained during the vote at the UN Security Council on extending the mandate of the International Criminal Tribunal for the Former Yugoslavia (ICTY).

“We are extremely disappointed that the ICTY did not act in line with the Security Council Resolution 1966 of 2010, namely the time frame for the conclusion of its work,” Russian Permanent Representative to the UN Vitaly Churkin said Thursday, commenting the country's stance on the issue.

© AP Photo / Frank Franklin II
UN General Assembly Adopts Russia-Proposed Anti-Nazism Resolution
Citing the Security Council's resolution on the ICTY one year ago, on which Russia also abstained, Churkin also said that “last year's resolution on extension of the mandate of the court to December of this year required that the tribunal adopt all necessary measures, so as to ensure the wind-up of the tribunal in line with 1966. These measures, unfortunately, haven't been seen.”

The resolution as adopted, with Russia abstaining, “requests the International Tribunal to complete its work and facilitate the closure of the Tribunal as expeditiously as possible with the aim of completing the transition to the Mechanism, and expresses its continued concern over delays in the conclusion of the Tribunal's work, in light of resolution I966 (2010), which requested the Tribunal to complete its trial and appeals proceedings by 31 December, 2014.”

On the ICTY's delay of cases, Churkin said that “objective contexts such as state of health of certain defendants can only partially explain the delay.”

The resolution, which received 14 affirmative votes along with Russia's abstention, urges the Tribunal "to redouble its efforts to review its projected case completion dates with a view towards shortening them as appropriate.”

International Criminal Tribunal for the Former Yugoslavia is a UN body established in 1993 for prosecution of crimes committed during the so-called Yugoslav Wars, which took place in 1990s.

Ukraine: will it become another Yugoslavia. US-Germany alliance poisoned by spies. Eduard Shevardnadze

From Yugoslavia to Iran