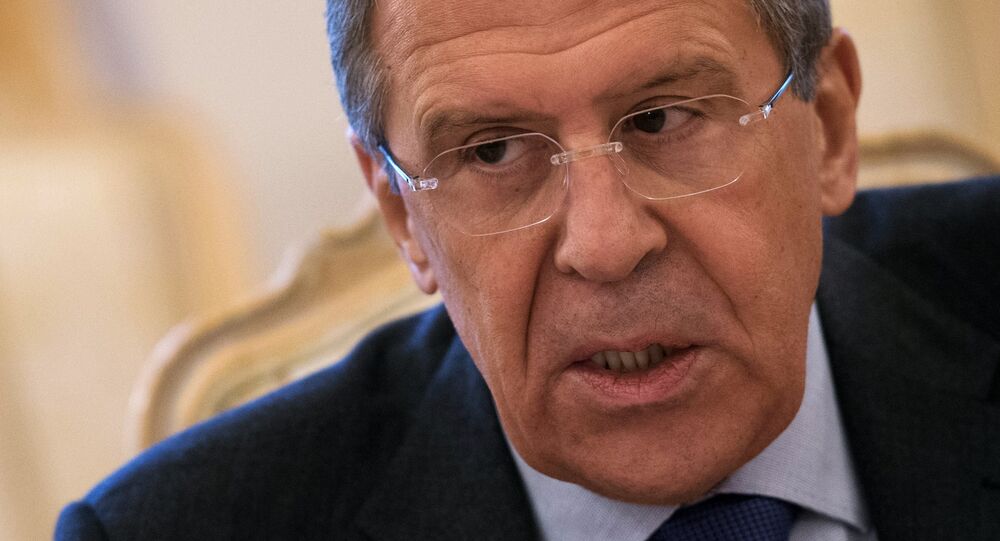 Amendments to Ukraine’s Constitution Should Guarantee Equality of Regions

Russian Foreign Minister Sergei Lavrov said that the crisis in Ukraine can be settled only when Ukrainians themselves reach agreements acceptable for both sides.

MOSCOW, December 9 (Sputnik) – Amendments to Ukraine’s constitution should not be “a cosmetic revision of previous states,” but a guarantee that the interests of all regions and ethnicities of Ukraine are respected, Russian Foreign Minister Sergei Lavrov said Tuesday.

“We will push for this obligation to be implemented,” he said.

Russia’s top diplomat added that the crisis in Ukraine can be settled only when Ukrainians themselves reach agreements acceptable for both sides.

“In our opinion, the lack of a balanced constitutional system in Ukraine that would take into account the interests of various regions and all ethnic and language groups of the country caused the political cataclysms that have been shaking the foundations of the Ukrainian state for many years,” Lavrov said in an interview with RIA Novosti.

International Monitors in Ukraine Lack Firmness in Some Cases

“We have to admit that in some cases the observers lack firmness and commitment to principle,” he said in an interview with RIA Novosti.

“The observers sometimes ignore facts of massive use of heavy weaponry and banned ammunition against civilians by Ukrainian troops and the deliberate destruction of vital infrastructure in the southeast [of Ukraine],” Lavrov said.

Russia’s top diplomat said the OSCE Special Monitoring Mission in Ukraine had been established by the member states in March because of “a pressing need to de-escalate the growing tensions in the country.”

“It’s quite evident that we are far from reaching this goal,” he said.

The OSCE Special Monitoring Mission to Ukraine was deployed after a consensus agreement by the OSCE’s 57 participating states at the request of Ukrainian authorities. The mission aims to reduce tensions and promote peace, stability and security in the country and monitors the implementation of the ceasefire in eastern Ukraine.

In mid-April, Kiev authorities launched a military operation against independence supporters in Ukraine's southeastern regions of Donetsk and Luhansk. The warring sides reached a ceasefire in September, but have since accused each other of violating the truce.

In mid-April Kiev launched a military operation against independence supporters in the country’s southeast, a predominantly Russian-speaking region, which led to a desperate humanitarian situation there.

In September, the warring sides reached a ceasefire. However, since the establishment of the truce, they have accused each other of violating the agreement.

Russia has repeatedly stressed the need for constitutional reform in Ukraine, which is a unitary state despite grave cultural and historical differences among its regions. In particular, the necessity to start nationwide dialogue on a constitutional reform was outlined in the Geneva agreements on the settlement in Ukraine reached by Russia, the European Union, the United States and Ukraine on April 17.

The self-proclaimed people’s republics of Donetsk and Luhansk are ready to restore common economic and political space with the rest of Ukraine, Russian Foreign Minister Sergei Lavrov said Tuesday.

“Judging by political statements of the recently elected leaders of southeastern Ukraine, Donbas is ready for economic cooperation with the Ukrainian side, for the revival of a common economic, humanitarian and political space,” the minister said in an interview with RIA Novosti.

Following a February coup in Kiev, residents of Donetsk and Luhansk in eastern Ukraine established people's republics that later declared their independence. An armed conflict erupted in eastern Ukraine in mid-April, after Kiev launched a military operation against independence supporters there, which led to the region’s acute humanitarian situation.

In early November, the Donetsk and Luhansk People's republics said in a joint statement they were ready to re-establish connections with the regions of Ukraine, conclude agreements with the Cabinet of Ministers, the country's enterprises and organizations, as well as supply Ukrainian regions with coal to last the winter.

In mid-November, Igor Plotnitsky, head of the self-proclaimed Luhansk People's Republic, claimed in an open letter to Ukrainian President Petro Poroshenko that Luhansk and Donetsk are ready to restore economic ties with Ukraine after the ratification of a peace treaty with Ukraine.

Following a February coup in Kiev, pro-federalization rallies have been raging in Ukraine's east after its residents refused to recognize the legitimacy of the new government that came to power.