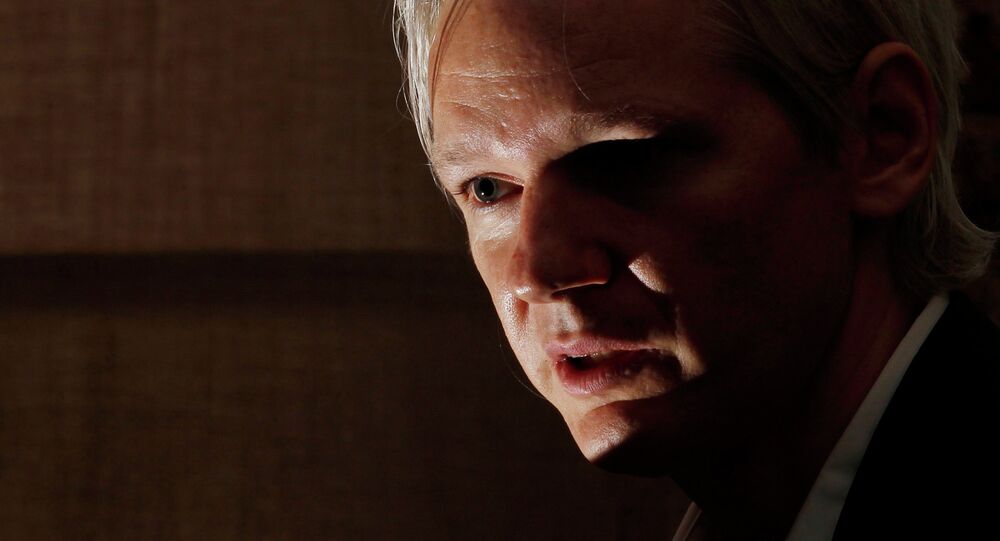 As of December 7, 2014 Julian Paul Assange has spent more than 900 days inside the Ecuadorian Embassy in London, it is four years since WikiLeaks founder was detained without charges in Britain.

MOSCOW, December 7 (Sputnik) — December 7, 2014 marks Julian Paul Assange was detained without charges in Britain. As of today, he has spent more than 900 days inside the Ecuadorian Embassy in London.

When he was a year old, his mother married Richard Brett Assange, the director of a wandering theatre company. Julian had a nomadic childhood, travelling around with his family. When Assange was eight, his mother divorced her husband and became involved with Leif Meynell, a member of the controversial Australian New Age group The Family, with whom she had a son. As the group took newborns away from their mothers, the woman and her sons ran away from Meynell. It happened before Julian turned 16.

Assange studied mathematics and physics at several Australian universities, including Central Queensland University, Australian National University and the University of Melbourne, but did not complete a degree.

Assange began his hacking “career” at the age of 16, when he created an organization called Worms Against Nuclear Killers (WANK) together with friends. They became well-known in October 1989, when the abbreviation WANK appeared on the NASA computer network just before the space shuttle Atlantis landed.

In their activities, the hackers followed the following rules: “Don't damage computer systems you break into; don't change the information in those systems; and share information”.

In 1991, Assange was found hacking into the computer system of Nortel, a multinational telecommunications corporation, and was prosecuted.

In 1997, he contributed research to the book called Underground: Tales of Hacking, Madness and Obsession on the Electronic Frontier, authored by Australian journalist Suelette Dreyfus. In 1998, Assange travelled around the world, and also visited Russia.

Assange led a team of nine project coordinators. He did not describe himself as its “founder” but only as “editor-in-chief,” acknowledging that he had the final say in posting documents on the website.

Assange admitted that he and his associates had to take precautions as they received threats. He drifted around the world, spending most of the time in Sweden, where in August 2010 he became a columnist for the daily Aftonbladet. Later the same month Swedish police put the Wikileaks founder on a wanted list for questioning on two counts of rape alleged to have been committed against two women. Assange denied the allegations, and his arrest warrant was soon recalled, as prosecutors decided that the suspicions against him were groundless.

In November 2010, a Stockholm court issued another arrest warrant for Assange on allegations of rape and molestation. On November 20, Interpol put him on an international wanted list on charges of sex crimes.

On May 30, 2012, Britain’s Supreme Court refused his extradition appeal.

As of June 2012, Assange has been taking refuge in the embassy of Ecuador in London. Swedish authorities demand his extradition from Britain. Ecuador is granting Assange political asylum, but British authorities say they are determined to “honour their obligations” to Sweden.

In the spring of 2011, media reports said that Assange would write his autobiography to cover legal costs, for which he would receive over 1 million British pounds ($1.5 million). In late September, 2011, Canongate, a Scottish publishing firm, published the book without Assange’s consent.

In September 2014, Assange’s book When Google Met WikiLeaks was published in English. On December 3, the author made a video presentation for Madrid in Spanish. In his book, Assange claims that Google has collaborated with the US government, specifically the State Department.

In October 2014, several media reported that Assange is going to launch a range of clothing and accessories in partnership with the Indian manufacturer Franchise India.

Assange won the Amnesty International UK Media Award in 2009 for a series of materials exposing corruption in Kenya. In November 2011, Australian journalists awarded WikiLeaks the Walkley Award for Most Outstanding Contribution to Journalism.