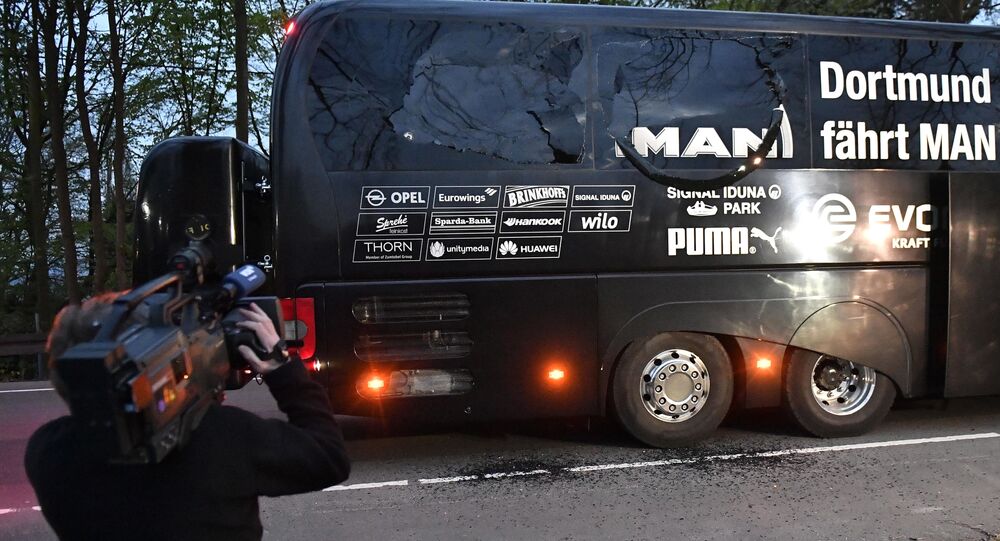 An official for the state prosecutor's office said that a letter was found near the blast site but that it was unclear if the letter was authentic. She declined to provide any details about the contents of the letter.

The explosions which took place near the Borussia Dortmund team bus were a "targeted attack" against the football team, local media reported Wednesday, citing police sources.

The prosecution said the author of the note claimed responsibility for the attack.

According to The Local news portal, police chief Gregor Lange made the relevant statement during a press conference.

Earlier reports indicated that three blasts took place near the bus with Borussia players. The explosions occurred in the Hoechsten district of Dortmund, some 9.6 kilometers (six miles) away from the Signal Iduna Park stadium where the UEFA Champions League quarter-final game against Monaco FC was expected to take place. The match was moved to Wednesday.

As a result of the explosions, Borussia player Marc Bartra was taken to a hospital. His arm was reportedly slightly injured by the broken glass. Police said that the explosions were likely to be "an attack with serious explosive devices," the Bild media outlet reported

"FIFA condemn the incidents in Dortmund. We are all awaiting further details of the incident," Infantino said.

"The thoughts of every one of us at FIFA are with the people of Dortmund, and the fans of both Borussia Dortmund and Monaco following today’s troubling events. We are closely monitoring the condition of BVB’s Marc Bartra, and wish him a speedy recovery from his injuries," he added.

Police said the explosion should "be taken seriously."