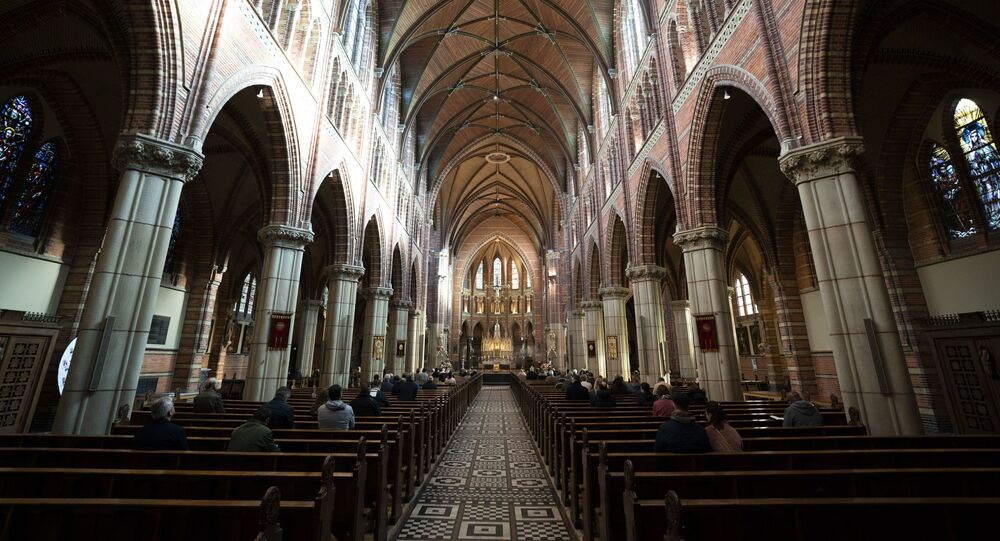 As the Netherlands is experiencing the second wave of the coronavirus pandemic, Christian activists are planning to protest against the government’s invasion into church life.

Dutch Justice Minister Ferdinand Grapperhaus announced after his recent meeting with the clergy that the country’s churches should limit the number of mass attendees to 30 and ban singing in order to stop the further spread of COVID-19.

Despite the fact that the current official regulations appear to be only limiting singing along, and not the main choir activities, the announcement has caused an uproar among some worshippers. According to Daniël van Deutekom – an evangelist from the town of Arnhem, who organised a protest against government initiatives, which is scheduled for 14 October, songs of worship are “part of experiencing Heaven”, and should not fall under regulations.

Sputnik: The government has been very careful in formulating the new coronavirus-related measures. At this point, are we talking about an actual ban, restrictions, or just recommendations?

Daniël van Deutekom: It’s not like it’s mandatory, but they are really forcing it upon the churches. So, the government is using their power, the strength of the media, to actually force churches to close, or stop singing. But it’s not forbidden constitutionally. I’m completely against that: personally, from my experience, worshipping God is one of the most important things in the life of a Christian. It’s one of those holy sacraments, which you can’t take away without taking a vital part of Christianity. Earlier today, I had this conversation with somebody on Facebook, and the person said: “yes, but the worship is way more than singing songs, or singing songs together – it’s a lifestyle.”

And he’s completely right. I said “yes, but at the same time, worship with songs is the primary way to worship God.” And he asked, “why do you say it?” And I said, “because it’s written in the Bible more than four hundred times – much more compared to other things that many evangelical people do.” So, there are many more expressions than just singing, but one thing that clearly stands out above them is singing to God as a form of worship. And if you look at heaven in Revelations, you see that all the angels of the Lord – they all worship god with songs – “Holy, holy, holy.” So, for me, there’s no discussion that singing songs is part of experiencing Heaven, experiencing God in our lives. I think that throughout all history, and throughout all denominations – you always see them singing, there is something about that.

Sputnik: There’s been a surge of coronavirus infections in the Netherlands recently, with the  total count of infections being at 187,138 and 6,654 corona-related deaths . In the province of Gelderland, where you live,  716 people have died from complications caused by the virus. Don’t you think that COVID-19 is a major health threat to church goers and their families?

Daniël van Deutekom: It’s not like all the “science has been settled”. There is a popular phrase which says “Science is settled-end of discussion”, but there is no end to this discussion. Certain researchers back the idea that singing actually increases your likelihood of contracting the virus, but other researchers suggest that it doesn’t increase the risk. And, at the same time, we see that people do get infected within the churches, but it’s only 0.3%. When you look at the past couple of months, 0.3% of those infected were infected in churches, and it includes small house churches, where there is hardly any ventilation, hardly any room above your head.

For instance, Staphorst – I think you’ve heard about it – it was a big catalyst for this entire discussion. In Staphorst 600 people came together, but nobody contracted the virus for weeks following those meetings. I believe that’s because they had plenty of ventilation, plenty of social distancing. So, I’m not saying that it’s not important to be careful, but my point is that I believe that social media, and the media and politicians that respond to the media – it’s completely not proportional. During the same period of time 54.6% contracted the virus not in churches, but at home. So, I don’t see this entire social media, or media campaign against people who want to hang out with friends, but if they want to stop the spread – that’s the first thing that they should do – stop hanging out. But nobody’s talking about it, they just want to blame the Christians – that’s how it feels for me.

Sputnik: You’re planning to organise a rally at The Hague on 14 October, to protest the new regulations. What will be your main message to the Dutch authorities?

Daniël van Deutekom: It’s a good question. It started off as a protest, but then we changed it to an “event”, although, probably the Dutch authorities don’t like it, because “events are bad”. Juridically speaking it’s a protest, but then Christians don’t like it when you call it a protest, because “Christians shouldn’t protest”.  It started as a protest, but slowly the Lord softened our hearts, and now we just want to share what is Jesus for us, and just “sing it out”. I believe – yes, we will send a message to the Dutch authorities, but we will not focus on them except blessing them. We’ll pray for them, because we will be 300 meters away from the Parliament. I believe that when we make this statement of what we believe in – people will see it, and people will see that we find it very important, and I think people in politics will care. In that sense – it is a protest, it’s a demonstration - as a friend of mine said “it’s a demonstration of the Kingdom of God”.