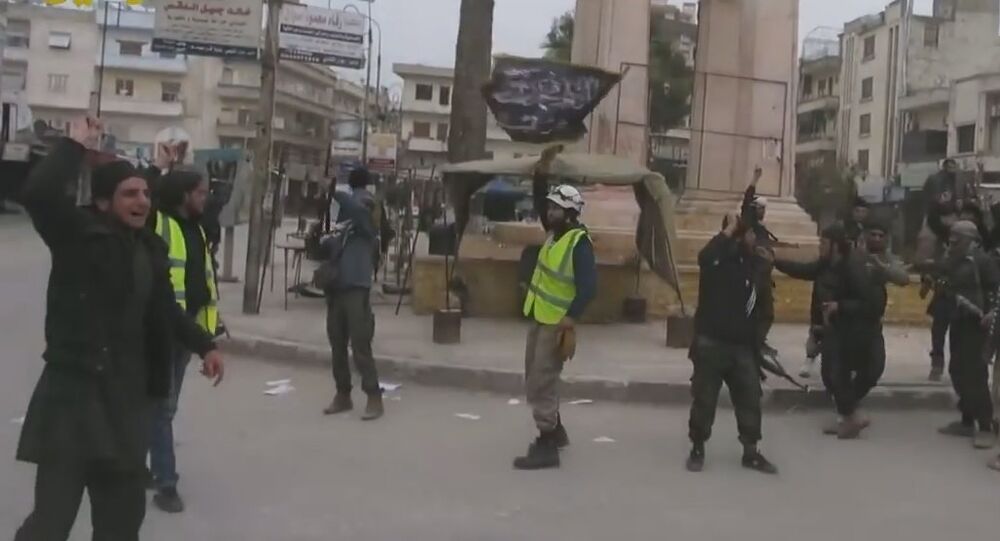 Independent British investigative journalist Vanessa Beeley has provided Radio Sputnik with a pretty thorough and damning explanation of why 'Last Men in Aleppo', the new feature length documentary on the White Helmet rescue organization's operations in Aleppo in 2016, is little more than a propaganda piece financed by Western governments.

The film, screened at the World Economic Forum in Davos, Switzerland this week, has received widespread praise from major Western media outlets in recent months and has now been nominated for an Oscar.

Speaking to Radio Sputnik, Beeley, a journalist and peace activist who has made a series of trips to Syria over the years, said she was deeply troubled by the fact that the film has received such widespread critical acclaim, given that it is effectively an al-Qaeda promotional vehicle.

"The fact that children have been allowed into this film is something I find particularly disturbing," Beeley said, because "the White Helmets have consistently and systematically exploited children to promote a war that will effectively kill more children."

Even more troubling, she stressed, was the fact that the White Helmets are an organization which "by their own videos, by their own testimony, by their own social media accounts, and by the videos produced by the associated so-called rebel media," are affiliated with jihadist militias, including al-Qaeda.

© AFP 2021 / AMER ALMOHIBANY
Members of the Syrian Civil Defence, known as the White Helmets, take a selfie with their certificates after taking part in a training session in the rebel-held eastern Ghouta area, east of the capital Damascus, on November 22, 2016

Beeley emphasized that in the course of her investigations, she has gone to Aleppo, including the area where the documentary was filmed. "This area was in the al-Ansari area of East Aleppo. We identified the buildings featured in the film as being the White Helmet headquarters in that particular area."

In a twist which she said was not so surprising, Beeley pointed out that "as usual…next door to this centre was the Nusra Front centre, i.e. al-Qaeda in Syria. Next door to that was the Abu Amara building, Abu Amara [being] basically like the protection agency for Nusra Front and known to be even more brutal than Nusra itself. Next door to that was the media centre for both Nusra Front and Abu Amara. Bear in mind: this is in a line of buildings connected to the White Helmets centre that features in a film promoting them as saviours and heroes."

In other words, the journalist suggested, "if we just pull back a minute and review this film based on that information, fundamentally this film is showcasing al-Qaeda affiliates."

Pointing out that she has already been accused by the film's director, Feras Fayyad, of misidentifying the buildings in question, a claim she said was bogus, Beeley argued that it was worth asking what is prompting the director to try to cover up the White Helmets' true nature. "We have to ask the question: why is this multimillion dollar-financed organization, and the director of the movie that's promoting them, basically showcasing an organization which is clearly affiliated to al-Qaeda?" she asked.

The journalist also took note of the fact that Last Men in Aleppo was created in collaboration with the Aleppo Media Center, which she said was "a French Foreign Office construct designed to amplify the narratives that have been provided by al-Qaeda, by the terrorist and extremist factions, and their associated European-trained, funded and financed citizen activists who work with and are embedded with those organizations."

As for the film's Oscar nomination, Beeley said that she found it "absolutely extraordinary" that yet again, the prospect exists of another Oscar "being given to what is an al-Qaeda promotional feature film."

Asked why Western governments and media are refusing to accept the realities on the ground in Syria, even long after it has been established that groups like the White Helmets are affiliated with actual terrorists, the journalist suggested that it has to do with the US and European foreign policy agenda.

© REUTERS / Abdalrhman Ismail
White Helmets Volunteer Caught With Rebels Dumping Beheaded Bodies
In the UK, for instance, she said, media like the BBC and the Guardian, "who act as purveyors and promulgators of the Foreign Office foreign policy" have been tasked with promoting that policy, which in practice seeks "the destabilization of Syria to effect regime change in favor of a puppet regime that would be compliant with their neocolonialist policies in the region."

In Beeley's view, these governments and media aren't likely to let go of that agenda, nor of the White Helmets, which have proven "probably the most successful construct" supporting it.

"The protectionism toward this organization is incredibly important for them, and not only in Syria," the journalist stressed. "This construct and this concept are what they are protecting. Because James Le Mesurier, the British mercenary creator and trainer of the White Helmets, is now recruiting in Brazil. We've seen the same [type of] organization appearing in Venezuela, Malaysia, and Indonesia. So we know that this concept of 'the most trusted humanitarian NGOs' will be used to further infiltrate other nations targeted for intervention and imperialist policy."

Beeley took particular issue with The Guardian's review of the film, which she sees as being emblematic of the type of pro-White Helmets propaganda preventing the group from being looked at through an objective lens. Sputnik offers the balance of the journalist's remarks on the issue below:

If we then continue down [with The Guardian review], it mentions that they are 'bound by a desire to never leave the city they love, even as it disintegrates around them.' How poetic. But in fact, the White Helmets left [Aleppo] in the buses with Nusra Front to the next frontline, which will be in Idlib, where they will again act as the Western-financed human shields for the terrorist organizations that are being cleaned out from those areas by Syrian Arab Army and its allies.

The Guardian [also] removed comments, once they saw that people were actually not buying into this myth they are promoting that the White Helmets are brave hero saviours…This again is a common action by the mainstream media — to basically censor, suppress or repress any negative reaction to this lobbying for this organization, which we know is financed primarily by the UK Foreign Office, which has been proven by my investigations to be directly financing terrorism inside Syria via a number of intermediaries that have been identified."

The views and opinions expressed by Vanessa Beeley are those of the expert and do not necessarily reflect those of Sputnik.